Razer is working on AMD/NVIDIA laptop

A premium notebook brand that has exclusively used Intel processors is currently working on an AMD-based laptop, a leak from 3DMark appears to indicate.

According to a leak from @_rogame Razer is developing a new 14-inch laptop with AMD Ryzen 9 5900HX CPU and NVIDIA GeForce RTX 3060 Laptop GPU. Such a configuration is currently not offered by Razer in any of their existing laptops, in fact, the manufacturer does not offer AMD Ryzen products at all. As of yet, the collaboration with AMD has not been announced, so it is unclear if Razer and AMD are only evaluating a laptop design that might launch in the future, or this is a preproduction sample of a device that is almost ready for launch.

A product named ‘Razer P1411’ might refer to Razer Blade 14. The company has not released a 14-inch laptop design with the current generation of Ampere cards as the focus has shifted towards 15 and 17-inch designs. Razer does however have a 13 inch Blade Stealth 13 with Intel 10th Gen Core and GeForce GTX hardware.

What might be interesting is that Razer would be using an HX variant of the Ryzen 9 5900 CPU. The power-limited (35W) version called HS appears to be exclusive to ASUS once again, who are using 5900HS for their ROG Zephyrus G14 (also 14-inch laptop). Manufacturers have however an option to power limit the CPU through the BIOS, which might a good idea for such a small form factor gaming laptop.

Razer & AMD laptop would also be paired with GeForce RTX 3060 graphics card. The card is listed with 1750 MHz (14Gbps) memory, which indicates a Max-P variant (could be anything from 115 to 80W). 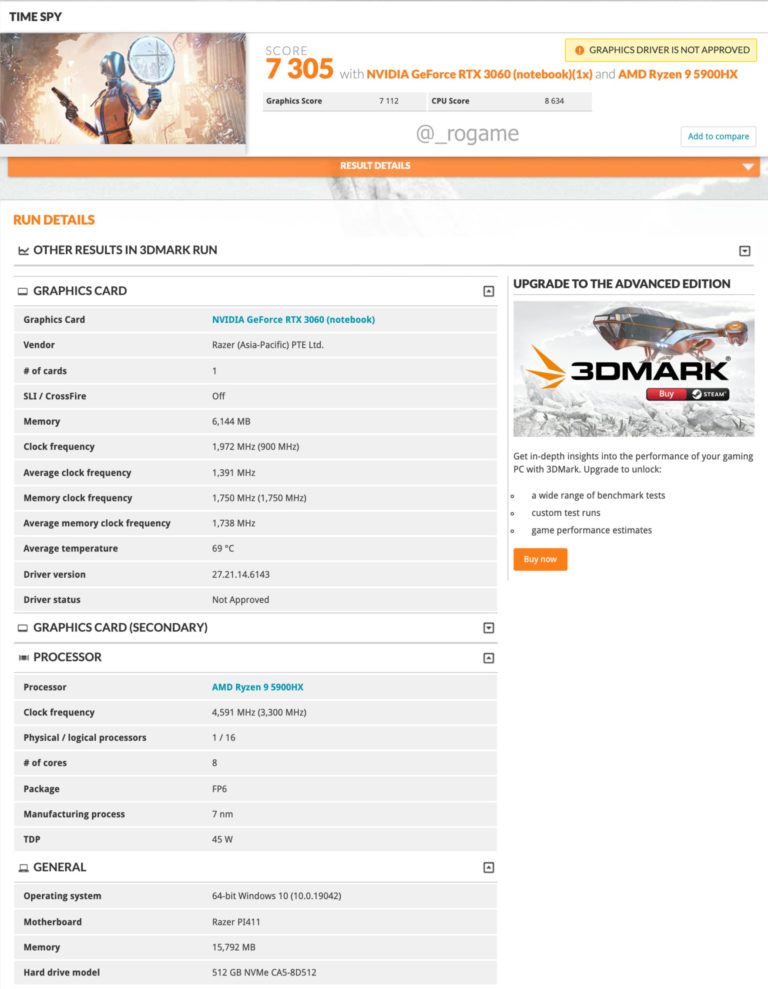