Yuri Bubliy (1usmus) has been working on an evolution of his Clock Tuner for Ryzen.

The software developer revealed a concept for an upcoming Zen3/Zen3+ overclocking and tuning tool called Project Hydra. Judging by the software name, the tool is currently in the 0.1A PRO version, which suggests it is in a very early state. Also, a quick note is that 1usmus is now planning a PRO version of his tool, which will give some additional features.

Hydra is designed specifically for Zen3 architecture. Owners of Zen2 CPUs and older ones should consider using the CTR tool from the same developer. Yuri appears to be certain that Zen3+ is a thing, which is why he specifically mentioned this architecture in the press slides shared exclusively with GamersNexus. The Zen3 family now includes mainstream CPU and APUs series, but it should add the Threadripper series later this summer. Whether Hydra will support all these products, is yet to be confirmed. 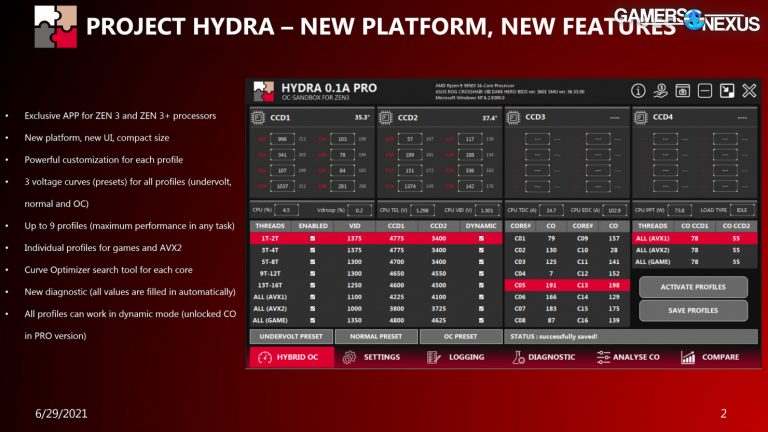 The software is based on the CTR framework but it features a new UI and supports three voltage curve presets: undervolting, normal, and OC. Up to 9 profiles can now be stored for specific tasks. The Voltage Curve Optimizer is also now adjustable on a per-core basis. 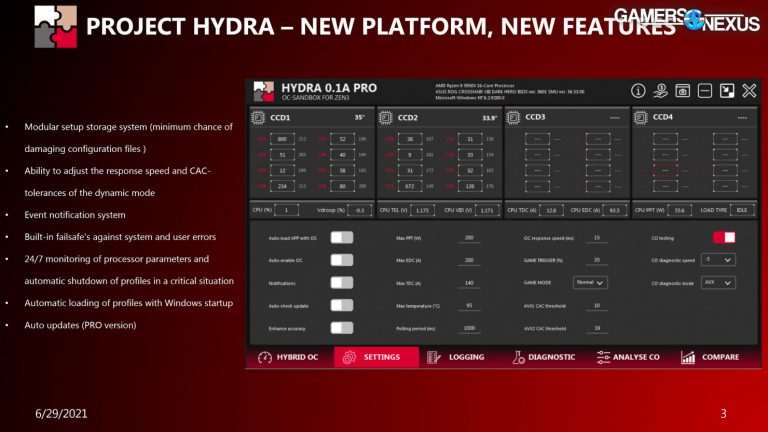 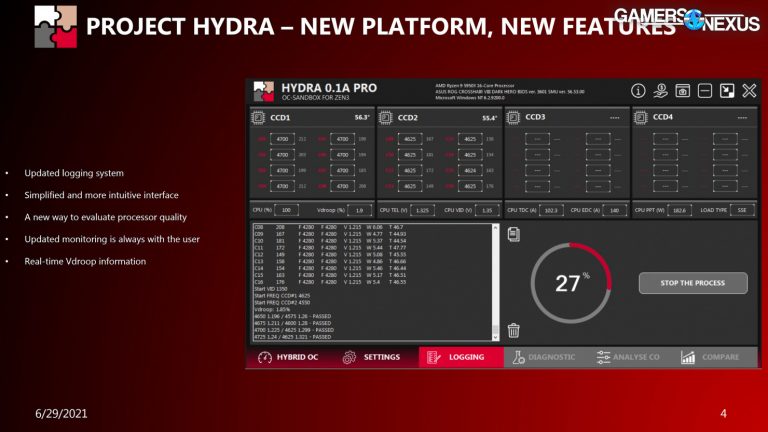 This tool from 1usmus communicates with the SMU (System Management Unit) via the PCIe bus, which prevents blocking or overwriting of the selected profile. Yuri also made sure that the tool will not consume more than 100MB of memory and 1% of CPU utilization. In other words, he thinks that the tool should now be more secure and lightweight than the Ryzen Master. Here’s a short overview of Hydra by the creator himself:

HYDRA constantly communicates with the SMU via the PCI bus (without blocking it) and depending on the data received, it changes the frequency or switches the profile. Resource requirements are also minimal, up to 100 MB of RAM and 0-1% CPU usage. The chance of damaging a processor with this program is lower than with AMD’s own Ryzen Master (it does not use PCI mutex and this can be the ideal weapon to destroy processors.

HYDRA users PCI mutex, hardware mutex SMU and also checks command integrity. PCI mutex is a means of protecting the commands from being overwritter or modified. Ryzen Master does not have this protection.

If the user founds out that his AMD processor has a low frequency margin, the standard version will be enough for him to get the maximum performance. Of course, the Pro version will have additional support and all the new features will first recieve it, through early access. It seems like a fair policy to me, minimal restrictions and everyone will have a choice.

According to Yuri, the tool will be released by the end of this month. It is worth noting that the Pro version will guarantee better support, additional features, and early access. We are yet to hear all the details of Project Hydra. Hopefully, Yuri and the people involved in testing will soon share their results.