The most recent filing to Eurasian Economic Commission reveals that PowerColor expects both RX 6600 models to feature 8GB memory.

The filing covers mainly three Radeon models: Radeon RX 6600 XT, Radeon RX 6600 non-XT, and Radeon RX 6900 XTU. The 6900 XTU is of course the Navi 21 XTXH based model, already available as Red Devil and Liquid Devil Ultimate. Two of the codes included in this filing are already listed by PowerColor on the official website. The other two SKUs are non-OC models that PowerColor has not yet released.

When it comes to Radeon RX 6600 XT, PowerColor is preparing 13 SKUs. The likelihood of releasing this many cards is slim to none, besides the manufacturer always submits more SKUs in case they are needed in the future. Yesterday three models were listed by New Zealand retailers, including Red Devil, Hellhound, and Fighter series. All of these cards are included in this filing as well. Judging by the codes that were not known before, RX 6600 XT Hellhound will also be available in white color. 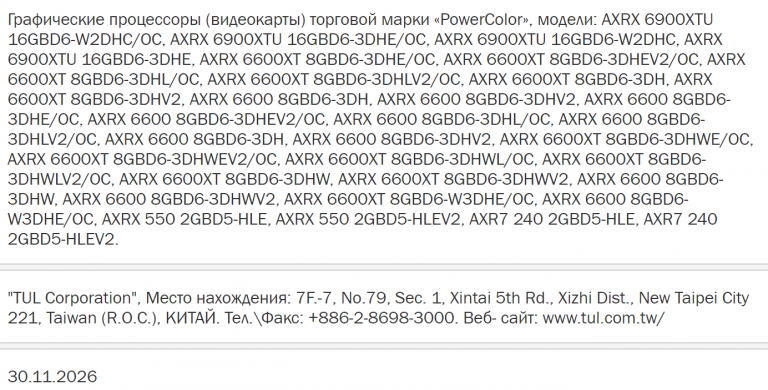 The manufacturer also submitted 11 SKUs on Radeon RX 6600 non-XT model. The codes appear to confirm that this SKU will indeed offer 8GB of memory capacity, with no 4GB option in sight, at least there are no such codes at this moment. The SKU will be available under the Fighter, Hellhound, and even Red Devil series.

AMD Radeon RX 6600 XT is now rumored to launch on July 30 with availability expected on August 11th. This is the first desktop gaming Navi 23 based model that should compete with GeForce RTX 3060 series. It is expected to cost under 400 USD, but the exact pricing has not yet been communicated to the press.