Pakistan is implementing GPU tax based on memory capacity

Memory made of gold

The government of Pakistan announced a new tax on graphics cards, based on their memory size.

In Pakistan, when one buys a graphics card, sales and income taxes are added (around 36% in total). This can significantly increase the price of the graphics card, which is why many imported GPUs are declared at much lower value.

To overcome this issue, Pakistan is implementing a new tax that assesses the value of graphics cards based on their memory size. In this case, it does not matter which model is imported and whether it actually makes any sense, but this will simplify the collection of taxes and resolve a problem of undervalued imported graphics card to some extent.

So, how does this work. When someone buys a GeForce RTX 3060 Ti with 8GB memory, unless stated otherwise, the assessed value for this card will be 192 USD. This value will be converted to Pakistani Rupee (assuming 215 exchange rate for dollar) which will put a 42k Rs. value and then 36% duty and tax will be added with a value of around 15K Rs. A total cost of the card will be 57k Rs.

In general, memory size is a good indicator of the graphics card’s performance segment, but in numerous instances it will lead to some incorrectly assessed values. Think RTX 3070 8GB with lower price than RTX 3060 with 12GB VRAM, or Radeon RX 6500XT with 8GB with the same assumed value as RTX 3070. 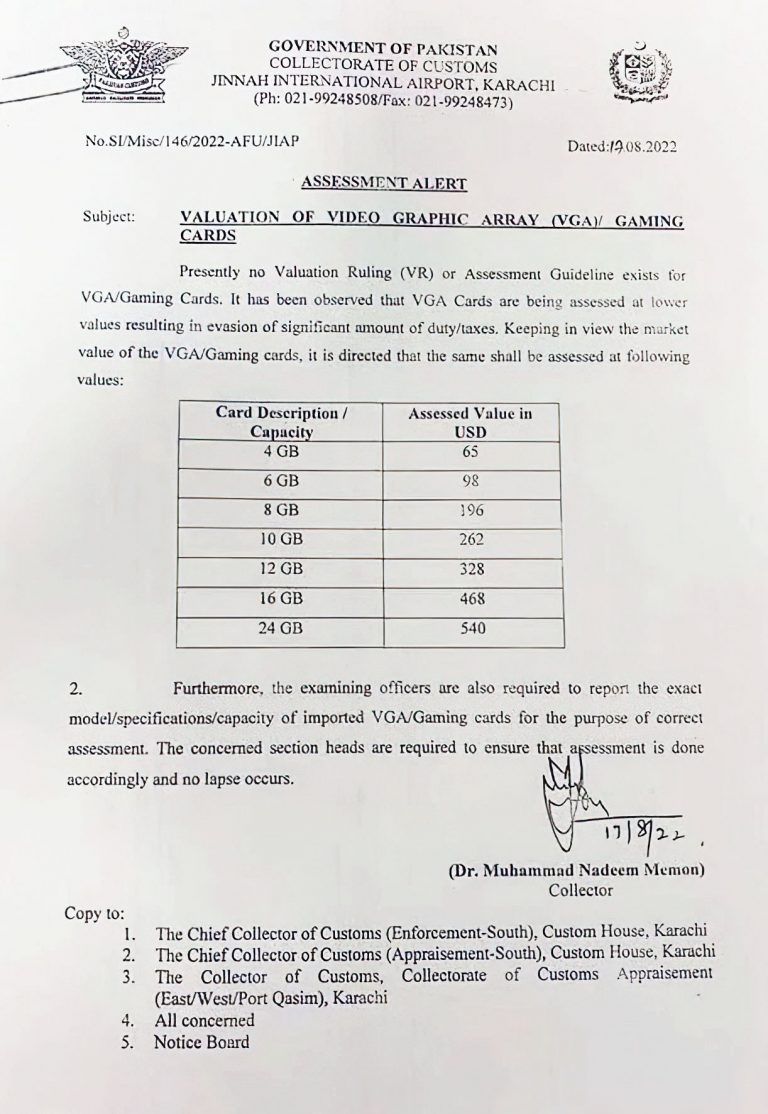 The custom officers will be required to report the exact models being imported, which may lead to further revalidation of this assessment. In general, unless someone maliciously replaces the label or even the whole packaging, it is relatively easy to assess a value of a graphics card. But if there is any problem with that, we encourage custom officers to check the latest pricing from 3DCenter or any local price aggregator site.