SkatterBencher purchased an Intel Arc A380 GPU off a Chinese website a few weeks ago. He was quick to overclock his card to peak 3.1 GHz, but the process is much more complicated than it should be.

First, the only available overclocking tool is the official Arc Control software, which provides very basic functionality and little explanation how to use them. The reviewer ended up analyzing the driver code to see what the click OC percentage slide actually does, only to discover it ends at 2450 MHz for the default Voltage-Frequency curve.

The built-in options such as Arc Control’s “GPU Performance Boost” is a percentage slider which does not scale the way it should be (30% increase with slide is 10% higher clock to 2696 MHz). The GPU Voltage slider does not actually work, and there are no memory overclocking tools available.

For that reason, SkatterBencher and Shamino came up with their own tool, which will not be made public for now. This program can override the settings and increase the clocks and voltages much higher. In fact, the overclocker even noted that he accidentally increased the GPU voltage to 2V at some point, which the card apparently survived. 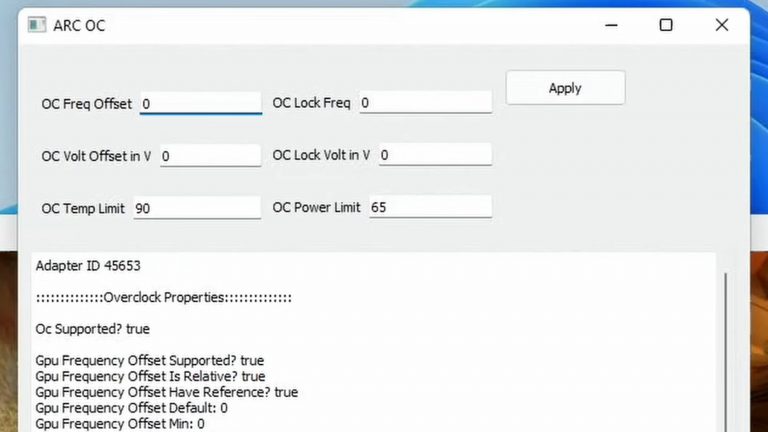 While this tool overcomes a problem of limited overclocking settings, there is still an issue of built-in power limits. Intel Arc A-Series GPUs have built-in PL1 (long-term), PL2 (short-term) and PL4 (spikes) power limits, just as the CPUs do. For A380, the PL1/PL2 limit by default is 65.5W and can be increased to 97.5W through Arc Control. Such limitations do not apply to custom tools built by SkatterBencher, here, the PL1 level can be increased to 298W and PL2 to 395W. 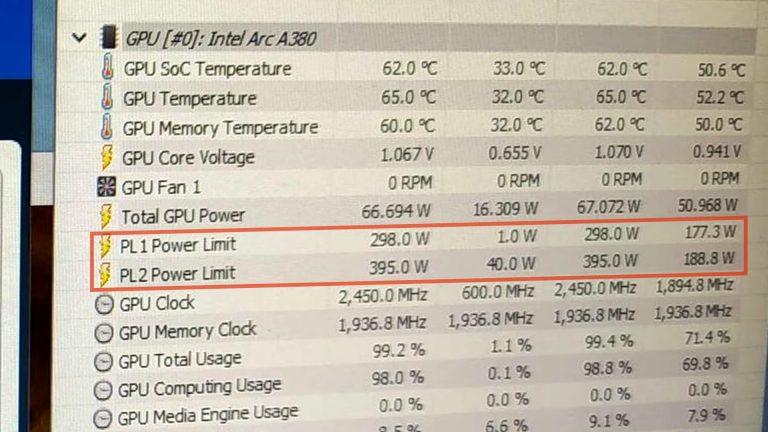 Unfortunately, it’s not the PL1 and PL2 levels that are important to SkatterBencher. It’s the PL4 limit that is built-in into drivers and set to 800W, which is preventing him from finishing the 3.1 GHz overclocking attempt. Once the power limit is triggered, the clock speed drops to 2.3 GHz. So the card does reach this frequency, but it does not stay at this frequency level for long.

SkatterBencher is currently evaluation options to modify the PL4 limit, but with no success so far. It appears that this low-end A380 GPU is not prone to shunt-modding, and neither the voltage controller data can be modified at this point. The software PL4 modification only allow power decrease rather than adjusting it higher.

With help from the community and other overclockers, SkatterBencher will probably work around this problem eventually, but one should not expect Arc GPUs working at stable 3.1 GHz any time soon. At least not until high-end models with much higher power limits are released.