A month ahead of the official GeForce RTX 3060 launch to the market, NVIDIA has plans to reintroduce its Turing cards first.

Interesting information has been shared by Overclocking.com today. According to multiple sources of theirs, NVIDIA has plans to reintroduce GeForce RTX 2060 series to the market, just as we expected its successor. The site claims that NVIDIA has already distributed new GPU stock to board partners and system integrators. The numbers of the shipments are not disclosed, nor it is explained why is it happening right now.

A year ago, the RTX 2060 non-SUPER received a 50 USD price cut to 299 USD. It wasn’t until December last year when first reports of the RTX 2060 series discontinuation have begun to appear. The graphics cards have indeed disappeared from the market and right now the very few cards that remained are available at a much higher price.

A quick check on RTX 2060 series on Newegg. All the cards sold by Newegg directly are not in stock, but the platform allows 3rd party sellers to put their listing there as well. Only three cards sold by Irish retailer are available for under 500 USD. Other cards are easily above that. On European price aggregator Geizals, only two cards are listed in stock, both priced above 499 EUR: 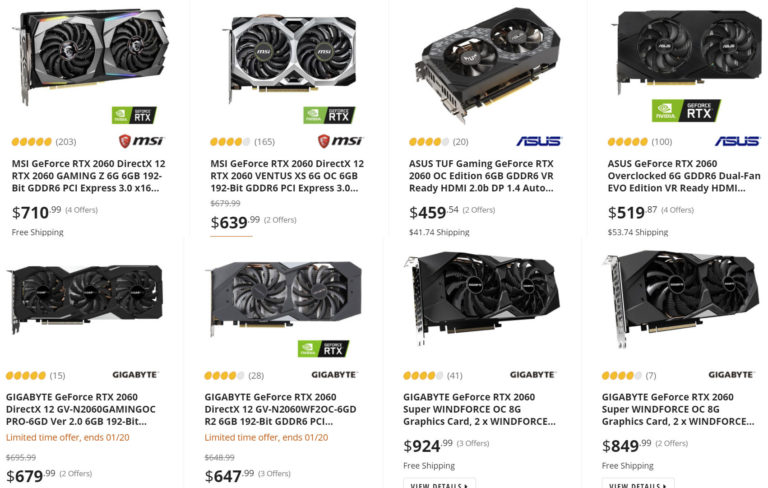 NVIDIA introduced GeForce RTX 3060 as a successor to RTX 2060 with noticeably higher performance. The reintroduction of the predecessor seems like a very unusual decision by the company, however probably necessary to due the limited stock of Ampere GPUs.

According to Overclocking.com, the reintroduced RTX 2060 and RTX 2060 SUPER will be priced at 300 EUR and 400 EUR respectively. The latter being well above the RTX 3060 which will retail at 339 EUR in France. Hopefully, this isn’t an indicator of limited GA106 GPU stock at launch.