NVIDIA to launch A100 PCIe accelerator with 80GB HBM2e memory

NVIDIA confirms 80GB is coming to the GA100 accelerator series with a PCIe interface.

The GA100 is the biggest GPU based on NVIDIA Ampere architecture. This chip features 54 billion transistors on an 826mm2 die. Combined with 40GB or 80GB of HBM2e memory we are looking at a powerful compute solution for HPCs. The GPU is currently offered in two variants, either with a mezzanine SXM4 connector or a standard PCIe 4.0. While both models offer similar peak compute power, there are differences in inter-GPU connection as the PCIe variant is only limited to two GPUs through NVLink.

As we have learned, NVIDIA will soon launch an 80GB model with a PCIe connector. This will mean that the manufacturer will offer 40 and 80GB models for both SXM and PCIe interfaces, currently, the 80GB variant is only available with the SXM connector.

NVIDIA has not yet confirmed the existence of this GPU, at least officially. Unofficially, it is possible to find references to this variant already in NVIDIA’s own Data Center documentation:

Officially only three variants of A100 exist at this moment, but as we have confirmed with our sources, the 80GB PCIe model will be released next week. This variant is also expected to feature 2 TB/s bandwidth. 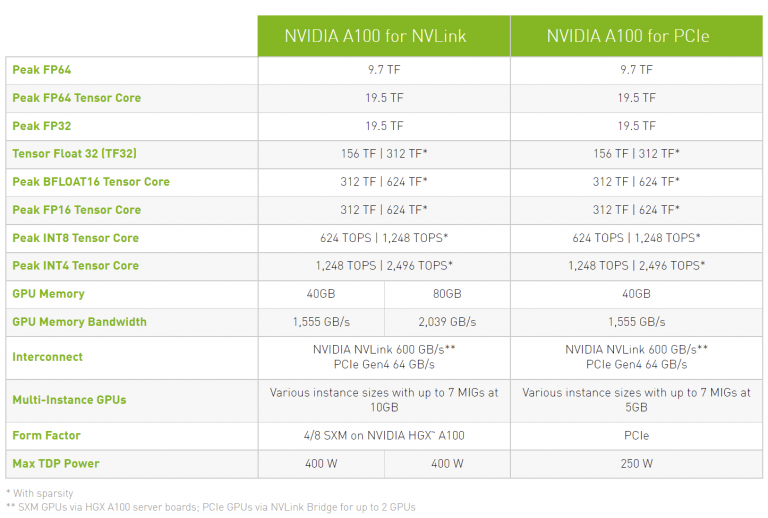