According to a Tweet by hongxing2020, NVIDIA will indeed launch RTX 3090 SUPER early next year.

The tweet claims it is true NVIDIA is launching RTX 3090 SUPER, an updated flagship model with full GA102 GPU, and RTX 2060 12GB a refreshed Turing mid-range GPU with twice the memory. Furthermore, the report claims that NVIDIA will be updating RTX 3070 Ti with 16GB memory, something that we have not heard about yet.

NVIDIA will therefore be updating three SKUs representing each tier in its lineup. It is unclear what will happen to exist SKUs, or why would RTX 3070 Ti suddenly have more memory than RTX 3080, but then, there is RTX 3060 with 12GB memory already, so nothing sounds surprising anymore.

The report is missing information on other SUPER SKUs, which might suggest NVIDIA is either planning other SKUs for a later date or not planning it at all after introducing 3080 Ti and 3070 Ti variants just a few months ago. 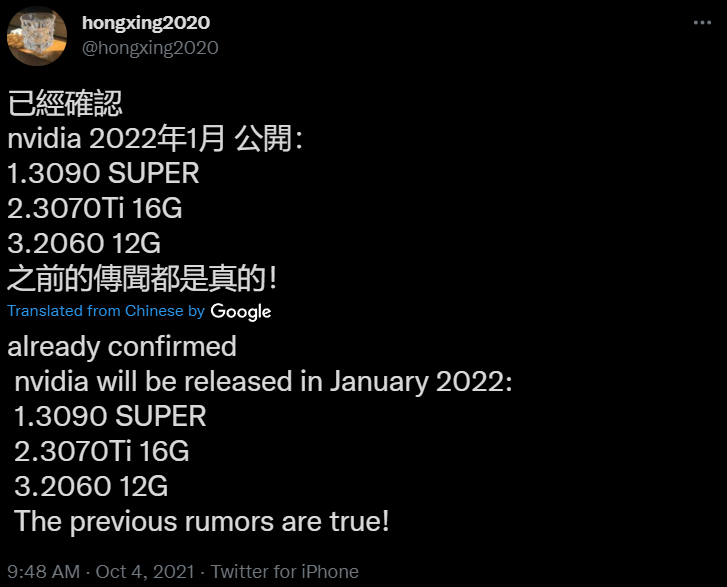 The entire RTX 30 SUPER desktop lineup has just recently been revealed @kopite7kimi, who expects four SUPER SKUs: RTX 3090 SUPER, RTX 3080 SUPER, RTX 3070 SUPER, and RTX 3060 SUPER. The arrival of the SUPER series with updated vanilla/Ti models suggests NVIDIA is saying farewell to sub-8GB memory variants once and for all. This is a response to AMD launching Radeon RX 6600 XT and soon RX 6600 with 8GB memory. So far both companies have avoided releasing graphics cards with lower memory capacity.