As discovered by Tom’s Hardware, NVIDIA RTX Voice now works with GeForce GTX graphics cards as old as Kepler-based NVIDIA GTX 600 series. NVIDIA has added support for GTX models with the 410.18 drivers, the site reports. This means that the technology was introduced to the GeForce GTX series quietly and probably no one would have noticed if not for Tom’s article. Manuel Guzman from NVIDIA confirmed that RTX Voice was introduced to the GTX series months ago when a new software called RTX Broadcast was released.

NVIDIA RTX Voice was released a year ago, just as many people were forced to stay at home and work remotely due to the outbreak of the pandemic. This technology is using a special AI algorithm that reduces background noises and as a result, improves voice audio quality.

Originally NVIDIA claimed that RTX Voice uses Tensor cores, but it was quickly discovered that the technology will work with non-RTX GPUs as well as on Windows 7 operating system. NVIDIA eventually gave up pretending and the technology is now available to all GeForce users whose cards are at least based on Geforce GTX 600 series.

NVIDIA has since then introduced its RTX Broadcast software which is considered a successor to RTX Voice. It is believed that NVIDIA might no longer update its RTX Voice application as it has been integrated into the Broadcast software stack already.

TechPowerUP has a comprehensive review of this technology in action, including numerous demos with different microphones and scenarios. It was also noted that the technology does have a significant performance impact and even more significant if the user chooses to filter input and output audio. Overall users should expect 8% to 20% performance loss and as much as 30W higher power usage when technology is used. 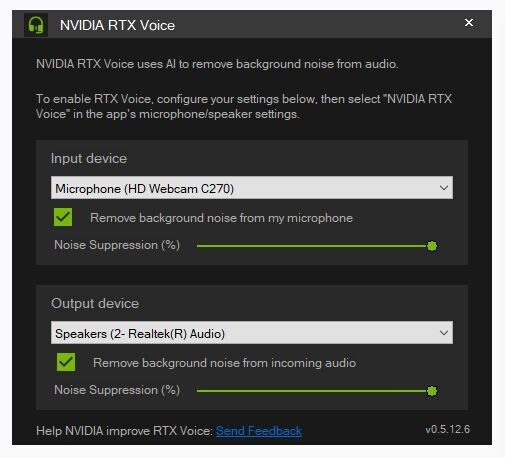