The consumer electronics market is slowing down rapidly. The interest in new TVs, mobile phones and PCS and has declined as quickly as pandemic has ‘ended’ and inflation struck global markets.

Both AMD and NVIDIA are revising their TSMC orders, reports DigiTimes. The website citing their industry sources claims that Apple, AMD and NVIDIA all wish to change their orders. AMD reportedly wants to lower its 7/6nm wafer orders while NVIDIA is now facing a problem of over saturated GPU market and possibly lower demand for next-gen GPUs.

NVIDIA now has a large stock of GeForce RTX 30 graphics cards for sale, yet the company is now willing to lower the price just yet. This is despite the second-hand market now being inflated by mining cards which are no longer profitable to use and keep. There are simply too many cards now, which paints a grim outlook for RTX 40 demand.

The most interesting details from DigiTimes article have been translated by RetiredEngineer: 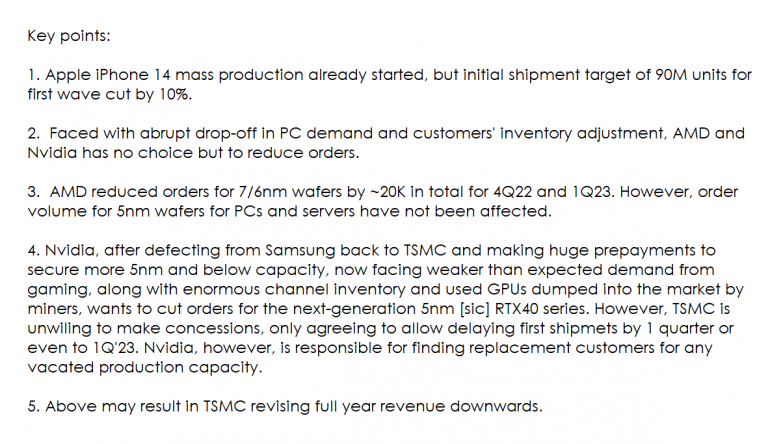 NVIDIA is one of the companies that made prepayments to TSMC for their 5nm wafers. Unfortunately for NVIDIA, TSMC is not willing to make concessions. At best NVIDIA can count on wafer shipment delay for up to two quarters, but it’s NVIDIA’s problem to find customers for TSMC vacated production capacity, which may be very hard given how demand has dropped for the whole sector.

NVIDIA is now expected to use 5nm (TSMC N4) technology for its upcoming GeForce RTX 40 series codenamed Ada Lovelace. The company is already using this process node for its Hopper (H100) data-center architecture.

The market situation has been reflected in lower stock price for AMD and NVIDIA. Both stocks have dropped by almost 50% in just 6 months time.