According to BoardChannels’ sources, NVIDIA has announced a discontinuation of RTX 2060/GTX 1660 series.

This is actually the second time the same source is claiming the end of the mid-range Turing series. Both reportedly discontinued products are based on very similar GPUs, except the RTX 2060 series supported raytracing and DLSS hardware acceleration, while GTX 1660 series were lacking those features.

NVIDIA RTX 2060 is a 2019 product that has seen various upgrades over its lifetime. Starting with the SUPER refresh just half a year later and last year’s 12GB memory upgrade. The GTX 1660 and 1660 SUPER series were respectively released with a 3-month delay. Customers have shifted their attention to RTX 30 series now, or even Radeon RX 6600 series which are considered much better priced. 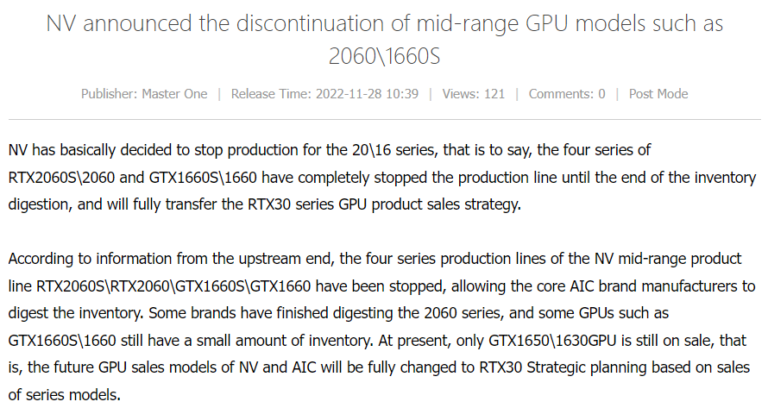 BoardChannels report that NVIDIA has confirmed the RTX 2060 and GTX 1660 are no longer produced. This affects all variants, including the SUPER SKUs. What is important to note is that GTX 1650 and GTX 1630 GPUs are not ‘canceled’ yet. Board partners still have excess inventory from the peak of GPU shortages. However, it is not clear if NVIDIA has stopped production of these cards as well.

NVIDIA’s current product lineup features GeForce RTX 3050 and RTX 3060 GPUs with 8GB. Those cards are still overpriced and sold at $285 and $335 respectively. Hopefully, with NVIDIA shift to Ampere series for low-end models, we will see better competition here soon.