NVIDIA to launch yet another GA102-based workstation card

New information straight from NVIDIA appears to confirm there is a new part coming.

NVIDIA RTX A4500 is coming, alleges the leak from Eurasian Economic Commission, a regulatory office where NVIDIA and their partners are required to submit all upcoming products. The filing confirmed that there is indeed an RTX A4500 workstation card, but this is as far as the official information goes.

This graphics card had also just recently appeared in a release note for the latest beta of AIDA64 monitoring software. It would suggest that the RTX A4500 would not utilize GA104 GPU (as the RTX A4000 does) but a GA102GL GPU instead. AIDA’s listing does not confirm which subvariant specifically though. 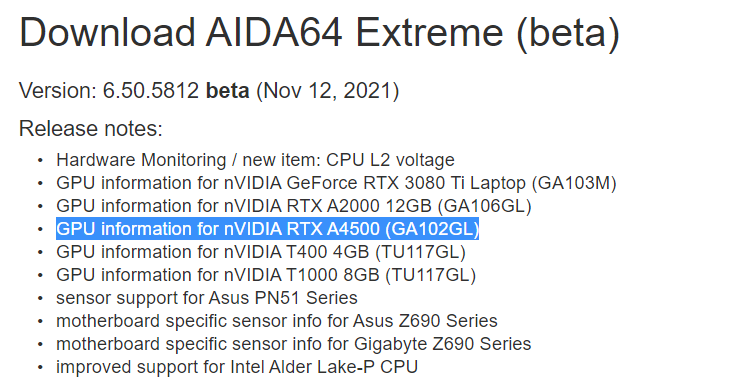 With that in mind, one would speculate that RTX A4500 might offer a smaller memory buffer than RTX A5000 (so less than 24GB). The latter already features the lowest CUDA core count from all existing GA102 graphics cards in the entire NVIDIA lineup, which is 8192 cores (76% active cores of the GPU).

That said, neither the specifications nor the release date of the NVIDIA RTX A4500 is currently known, however, the existence of this SKU is seemingly confirmed. NVIDIA has made no announcements at its second GTC 2021 this year, which suggests that the product might arrive later.

Update: According to @kopite7kimi, the configuration of this SKU is 7168 CUDA cores and 20GB GDDR6 memory.