NVIDIA could bring a high-end Ti variant to laptops for the first time.

According to Matthew Smith, a maintainer of TechPowerUP GPU and GPU-Z database, NVIDIA is now working on a new flagship mobile GPU called GeForce RTX 3080 Ti. What should immediately be noted here is that NVIDIA never released a Ti variant in this performance segment, as Ti variants were usually reserved for X050 models at most.

It is said that the card would utilize the GA103 GPU (GN20-E8), but the exact configuration of this model is still to be confirmed.

We spoke with Matthew on the actual source of this information. The name originated from the PCI Device ID database. A person nicknamed “Faintsnow” was first to submit a codename “GN20-E8” to an ID of 2420. The codename has later been updated to “GA103” by the same person. And finally, just four days ago, a product name “GeForce RTX 3080 Ti Laptop GPU” for this ID was posted in the database. We were unable to confirm whether “Faintsnow” had previously submitted similar information, but it should be noted that no one else has been able to tie ID:2420 with any name or product. However, this database is usually maintained by people working for GPU vendors so it is very likely that it is not based on pure speculation. 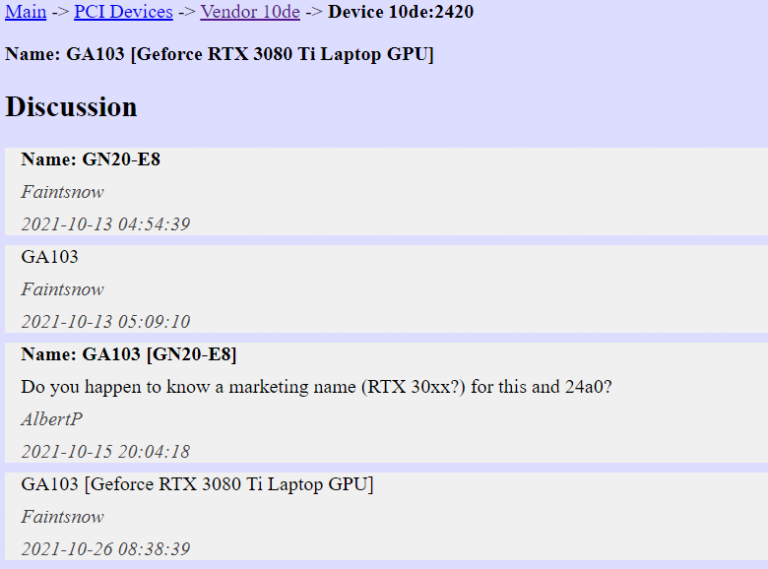 The GA103 GPU is an old rumor that has not yet found a confirmation. The processor allegedly features up to 7680 CUDA cores. The GPU should retain a 256-bit memory bus, which makes 8GB and 16GB configurations a possibility.

The supposed flagship now has three different names, and neither has been confirmed yet. The RTX 3080 SUPER had already appeared in a leak featuring Lenovo laptop (pictured below), but the Device ID repository submissions claim it is actually a Ti variant. At the same time, we have prominent NVIDIA leaker @kopite7kimi claiming it may actually be RTX 3090M (aka Laptop GPU). None of these names, besides the SUPER model, have found confirmation in the actual leak yet.

That said we cannot be sure if NVIDIA is rolling out multiple new high-end SKUs or we are actually talking about the same graphics card only with three different names.