Following NVIDIA’s ridiculous decision to drop Max-Q branding for Laptop GPUs, NVIDIA has made a third statement regarding the situation of the GeForce RTX 30 Laptop GPUs. As we have explained in previous stories, NVIDIA has decided to treat Max-Q as a technology, not as a graphics card moniker that helped customers differentiate between full-fat and power-limited variants. As a result, laptop makers have begun listing all GeForce RTX 30 graphics cards on their notebook pages without any information that would ultimately confirm which of the 28 possible variants is being used by the laptop. In the end, consumers would have to rely on public information shared by independent websites or reviewers or seek information through product support, which would not always provide the most up to date information.

Since then, NVIDIA has issued a short statement to The Verge where the company has encouraged laptop makers to list the specifications on the product pages and in marketing materials. Some brands, such as Schenker XMG have already listed the specs before NVIDIA issued a statement, while the ‘encouragement’ from NVIDIA has only made MSI and ASUS act and provide the information. Unfortunately, other manufacturers were not so eager to share the specifications. which has resulted in NVIDIA today issuing a statement. This time around NVIDIA has confirmed that listing of clock speeds and power (TGP) is now a requirement.

We’re requiring OEMs to update their product pages to the Max-Q technology features for each GeForce laptop, as well as clocks and power — which communicates the expected GPU performance in that system,

— NVIDIA Spokesman to The Verge

We have already seen how much TGP (Total Graphics Power) can affect the performance of mobile graphics cards, often showing a 30% difference between the SKUs.

Earlier this week ASUS has become the first OEM to list all specs (including boost clocks) for each RTX 30-based laptop:

XMG was the first and only OEM to list TGP’s for RTX 30 Laptop GPUs from the very beginning: 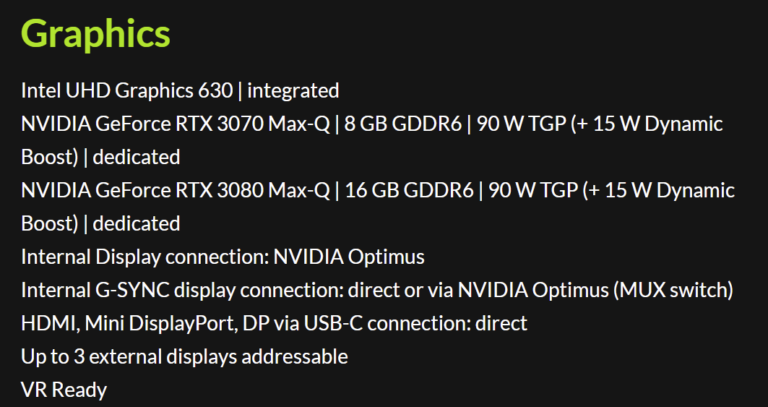 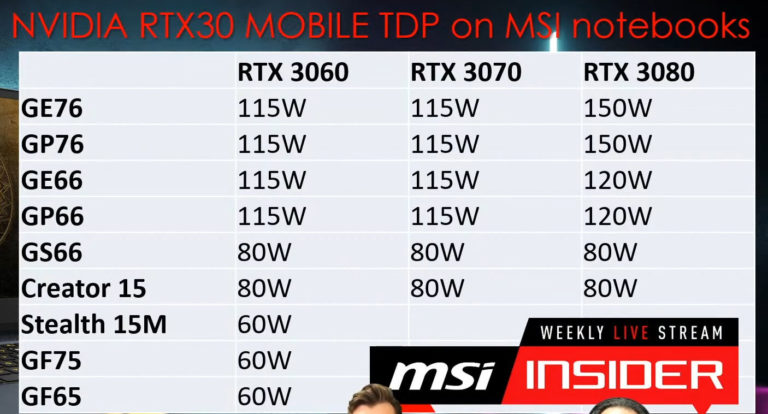 Other brands have been reluctant to share the specifications of the GeForce RTX 30 Laptop GPUs:

There are 28 variants of GeForce RTX 30 Laptop GPUs. Some power-limited higher-end SKUs end up being slower than much cheaper models, only because they have higher TGPs: