NVIDIA MX series of discrete GPUs are designed to offload important tasks from the mobile CPU. Such graphics were often used by systems that would otherwise have to rely on integrated graphics, which were often not powerful enough for more advanced tasks or lacked important functionally such as video coding.

In 2023, both Intel and AMD already have powerful integrated GPUs with support for the latest video codecs or even supporting AI accelerated workloads. Such graphics now allow casual gaming with popular MMO games, or even playing advanced titles at lower resolution.

A great demonstration of how great integrated GPUs have become is the rising popularity of handheld gaming consoles. These are now powered by Ryzen 6000 APUs with RDNA2 graphics or Intel 12th Gen Core series with capable Iris graphics. Interestingly, some vendors already announced an upgrade to Ryzen 7000 series (possibly with RDNA3 iGPU), so the gap between low power discrete GPUs and modern iGPUs will be even wider. 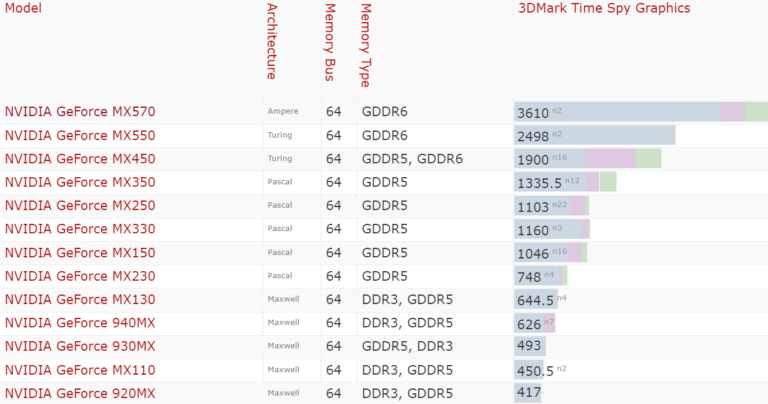 NVIDIA GeForce MX series were designed to operate at very low TDP, but the bottleneck was also the memory bus of 64-bit. The MX 570 GPU which has nearly the same specs as RTX 2050 (GA107 GPU with 2048 CUDA cores) offers similar performance to Intel Arc A370M, GeForce GTX 1650 or Radeon RX 6300M graphics.

In other words, the MX570 is not very fast GPU, but still faster than Radeon 680M (Ryzen 6000 APUs). But as we learn more about upcoming APUs, ITHome now expects that soon-to-be-released Radeon 780M GPU (integrated into Phoenix APU) will exceed MX570 performance.

Furthermore, NVIDIA is to launch its RTX 4050 graphics which go as low as 35W, so the very tight space between low-power APUs and discrete GPUs might be too thin to fit another product. The MX series are used, for instance, by popular Xiaomi Book Pro systems. The latest model features MX 550 or RTX 2050 GPU.