NVIDIA Studio driver released earlier this year included a new graphics card that has not yet been officially released.

So as it turns out, while only some IDs were included, the 511 Studio driver itself listed a new ID attached to RTX 3060 Ti graphics card. The new ID of 2414 appears to match the PCI Device family of GA103 GPU, the new GPU for RTX 3080 Ti laptop GPU.

There were rumors that NVIDIA might be preparing two variants of this processor, the GA103S for laptops and GA103 for desktops. The RTX 3060 Ti would therefore be the first desktop variant.

The fact that RTX 3060 Ti might be getting a GA103 GPU has already been recorded by PCI Device ID database maintainers, who have included the new SKU into their list. What this means is that we are now getting a third variant of this popular desktop GPU after NVIDIA release a Lite Hash Rate edition half a year ago. 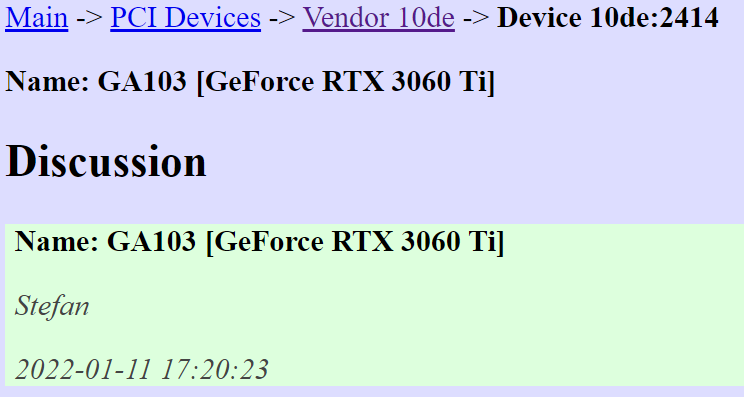 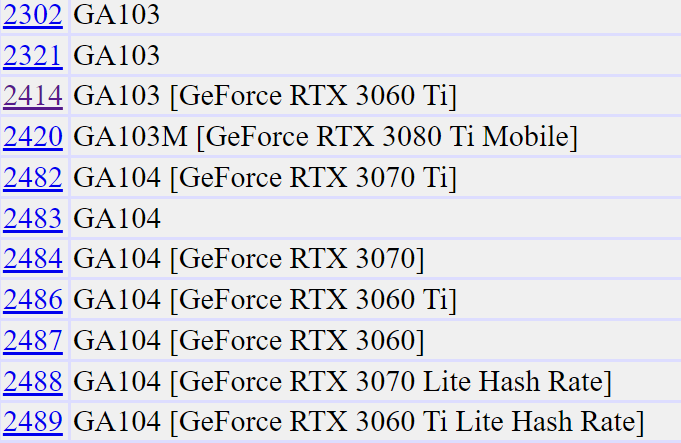 The RTX 3060 Ti has been the least supplied model in the RTX 30 family. Some board partners have told that they have not seen a shipment of this SKU for months as NVIDIA priorities more expensive RTX 3070 variant, also based on GA104 GPU. With the release of a new GA103 model, NVIDIA might finally have a chance to meet the demand for this very powerful mid-ranger simply by using two different GPUs.

It is unclear what could possibly GA103 be offering in terms of overclocking headroom, power consumption, or simply efficiency, after all, it is still made using Samsung 8nm process technology. But the GPU reportedly features 7680 CUDA cores in its full implementation, so the RTX 3060 Ti would only utilize 60% of the silicon. It should only be a matter of time before NVIDIA launches RTX 3070 with the same GPU as well.

Update: According to known NVIDIA leaker @kopite7kimi, this new RTX 3060 Ti variant is to feature GA103-200 GPU. This new processor is to feature the same specs as GA104 one.

Many thanks to westlake for the tip!