The GTX 1050 Ti series had launched on October 25th, 2016. More than 4 years later, NVIDIA has decided to resupply the chips to AIBs in order to meet the demand for low-end SKUs.

A video posted by Tech Yes City covers the topic of NVIDIA resupplying the GTX 1050 Ti series to retailers. One of the retailers confirms to TYC that GTX 1050 Ti cards were not available for nearly two years, only to reappear again in 2021.

Last month it was rumored that NVIDIA has begun resupplying TU106 GPUs for RTX 2060 graphics cards, but so far we have not seen an increased presence of this SKU on the market. At the same time, NVIDIA is now allegedly focusing on even older chips, such as the GP107-based GTX 1050 Ti series.

The 4GB graphics cards will certainly not deliver a high-end experience, but there is a good reason why NVIDIA is focusing on this SKU. Firstly, the supply of low-end GPUs is really low. The global pandemic has substantially increased the demand for entertainment and not all customers are willing to spend hundreds of dollars for a new graphics card. Wider availability of RTX 2060 and GTX 1660 would certainly release some pressure on supply channels. Meanwhile, retailers are to witness the popularity of the RTX 3060 model, which should launch two weeks from now.

Secondly, the 4GB cards are no longer attractive to GPU miners. The Ethereum mining now requires more than 4GB VRAM, which basically put lots of Radeon RX 470 and RX 570 cards back on the market. If you are tight on a budget, buying one of those cards might be a good alternative.

Interestingly just months ago NVIDIA has launched a new GTX 1650 SKU with GDDR6 memory, but the demand for G6 chips is so high that NVIDIA simply can’t meet the demand for these Turing cards, especially the GTX 1660 (SUPER) models which not only had G6 memory but also required 6 modules for each card. The manufacturer would now instead focus on low-VRAM Pascal SKUs which were never available with GDDR6 memory.

The GTX 1050 Ti cards are indeed available from retailers that we have checked. It would appear that only some SKUs are currently in stock, so it wouldn’t be true to say that the GTX 1050 Ti restocking had already happened. 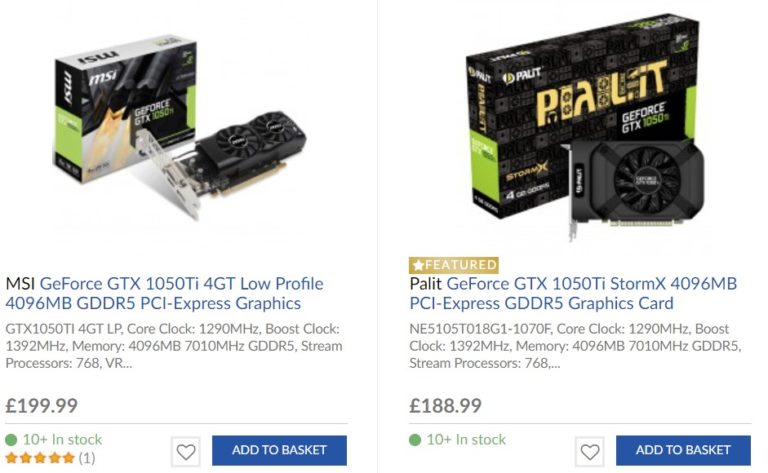