The RTX 4090 is not to come out until mid-October, which is also when performance reviews are meant to be posted. In that sense, the material shared today by Digital Foundry is more or less what NVIDIA has already showcased, except in slightly greater detail. Those who expect DLSS3 pixel analysis will be disappointed, but those who want to see how much faster some DLSS3 enabled titles can actually be, there is definitely something for you.

Digital Foundry was provided access to Cyberpunk 2077 (Overdrive RT edition), Spider-Man Remastered and Portal RTX. All three games will receive support for DLSS 3, but it is currently not available to anyone except reviewers. It is worth noting that even when DLSS3 updates are released, the technology will not be supported on GeForce RTX 30 or 20 GPUs (at least not now). 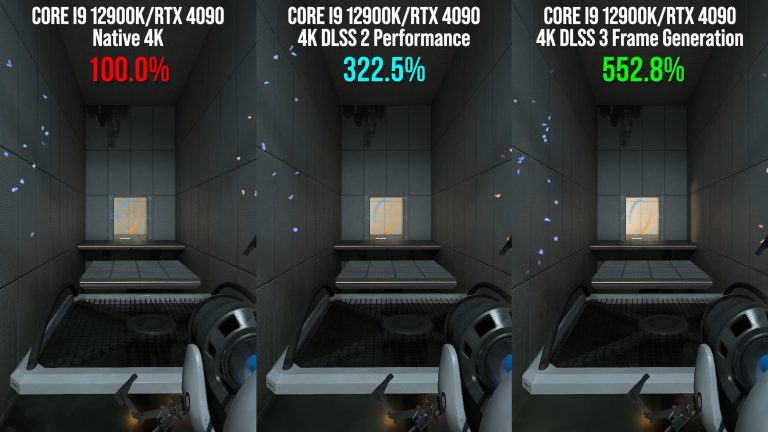 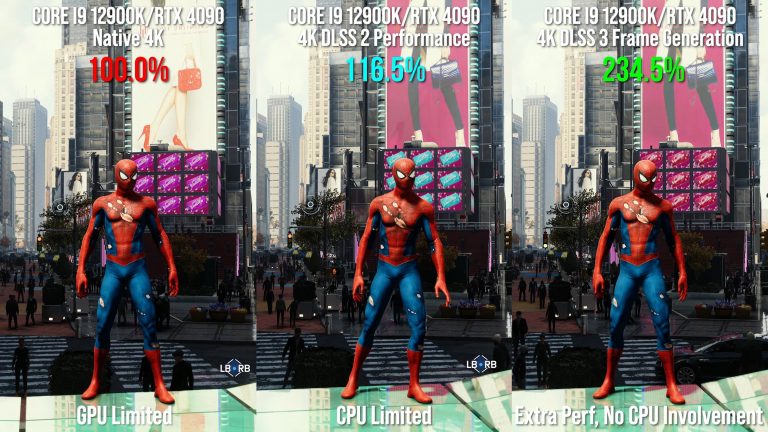 Digital Foundry was not allowed to show any framerate. However, they were allowed to show performance difference using percentage. The article and 30-minute long video is a more or less a showcase of DLSS3 in action with some side-by-side comparison to native and DLSS2 footage. Depending on the game, CPU limitation and whether the capture was in motion, games can expect 2x to 5x better performance with DLSS3.

NVIDIA DLSS3 is essentially generating full frames based on game data such as motion vectors and optical flow analysis, DigitalFoundry notes. By buffering frames, extra latency is introduced. This can be solved by NVIDIA’s own technology called Reflex, which is now part of DLSS3. A quick glance at frametimes shows that the latency is indeed higher than DLSS, but it is still lower than natively rendered frames. Note that this based on limited testing and only at one resolution, so the results may vary.

Hopefully, this performance analysis will later be followed by a deep dive into DLSS3 technology once the review embargo is lifted. In the meantime, follow the links below for more information on DLSS3.