With the release of an Overwatch sequel (or refresh if you prefer) NVIDIA is sharing their performance estimates for existing and upcoming GPUs.

The RTX 4080 series are still a month away from launch, but the RTX 4090 should become available as early as next week. NVIDIA posted a performance graph featuring three RTX 40 and three RTX 30 GPUs. According to NVIDIA, those Ampere GPUs are to be offered alongside Ada, at least until RTX 4070 and lower SKUs are launched.

According to this chart, the RTX 4090 offers up to 507 FPS at 2560×1440 resolution with Ultra settings. There is quite a gap between 90 and 80 series, with the second-best GPU RTX 4080 16GB at 368 FPS. Both cards are advertised as 360+ FPS and perfect match for 360 Hz gaming monitors. Here’s a reminder that Overwatch supports NVIDIA Reflex technology. 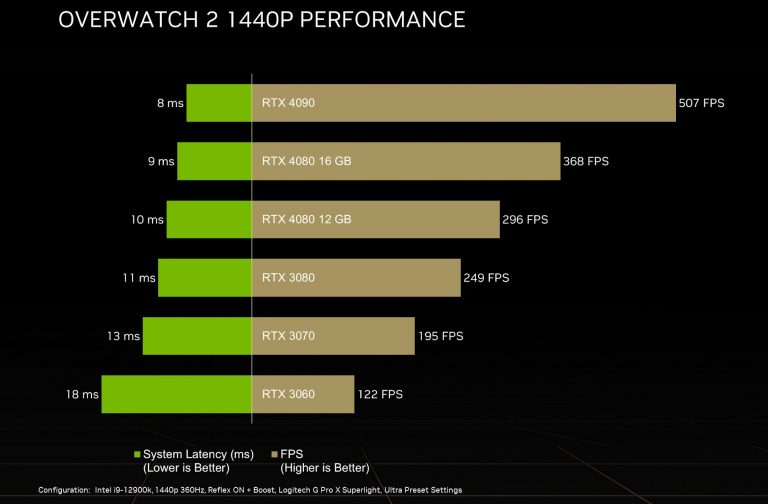 The RTX 4080 12GB (formerly known as RTX 4070) can generate sub 300 FPS with the same settings. NVIDIA is also making the following recommendations for this game:

There is a good chance that RTX 4080 12GB may offer similar performance to RTX 3090 series, but the game has been released less than 24 hours ago, so there are no comprehensive reviews yet. However, there is a chance reviewers may include this title with their Arc A7 GPU reviews which are expected later today.