Some interesting details on the future flagship Ada GPU series have been shared by Igor’sLAB.

Igor has been advocating the idea that the upcoming RTX 3090 Ti flagship featuring full-fat GA102 Ampere GPU is a test vehicle for the next-gen series. The reasons for such claims were simple, the RTX 3090 Ti will be the first NVIDIA card to feature PCIe Gen5 power connector and the first single-GPU GeForce to reach 450W TDP.

However, it is now revealed that GA102 and AD102 GPUs might be pin compatible, meaning that a large number of RTX 3090 Ti custom designs may be reused for the next-gen flagships: RTX 4080 or maybe even RTX 4090. Should that be true, this will save a lot of development efforts and costs for board partners. 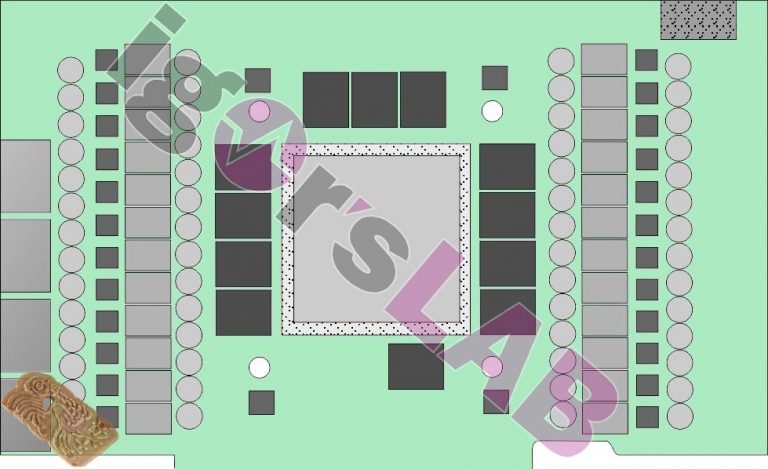 According to the report, the unnamed reference board for AD102 GPU would feature 24 voltage converters for the VRMs and 4 for the memory (a total of 28 phases). This is up from 20 on the RTX 3090. One should mention that this is a reference PCB, not a custom edition from a board partner. Because it is pin-compatible with GA102 GPUs and AD102 GPUs are not available yet, board partners are currently using it with a custom GA102 600W BIOS for internal testing before NVIDIA ships Ada GPUs to them. However, the board is ready and finalized, Igor claims.

NVIDIA RTX 3090 had two PCB designs, the PG136 for Founders Edition and PG132 reference board. The RTX 3080 has been using PG133 or PG132. Meanwhile, the upcoming RTX 3090 Ti is said to feature PG139, but it is unclear if this board number is for the Founder’s Edition or AIB semi-custom designs.

By the way, if you are wondering about the cookie on Igor’s PCB picture, it’s a cookie called “Spekulatius” (speculoos). Igor has been using this as an indicating “Spekulation” (Speculation) in his videos and articles.