Just hours after the first RTX 4080 scores made their way to Geekbench site, the same unreleased SKU has now been tested with 3DMark software.

Hardware leaker MEGAsizeGPU, who has an excellent track record recently, is now the first to share RTX 4080 3DMark scores from TimeSpy tests. The leaker has TimeSpy and Time Spy Extreme scores, respectively at 14718 and 28599 graphics points. This is more or less what was expected from this card based on previous leaks and official gaming performance data.

Since MEGAsizeGPU posted full screenshots from the 3DMark test, we also get a glimpse of real-world GPU clocks. Here’s a reminder that RTX 4080 has nearly the same boost clock as RTX 4090 (2508 MHz vs 2520 MHz), which is probably why we are seeing similar near 3.0 GHz clocks during this test. However, the card tested is most likely a factory-overclocked variant, as the leaker shared pictures of Inno3D’s RTX 4080 iChill X3 packaging earlier.

NVIDIA is now set to launch its RTX 4080 GPU on November 16th. This model features AD103 GPU with 9728 CUDA cores and 16GB GDDR6X memory. This is the only RTX 4080 SKU now planned after NVIDIA canceled the 12GB variant last month.

Update: MEGAsizeGPU confirms the card boosts up to 2.9 GHz at a default TDP of 320W: 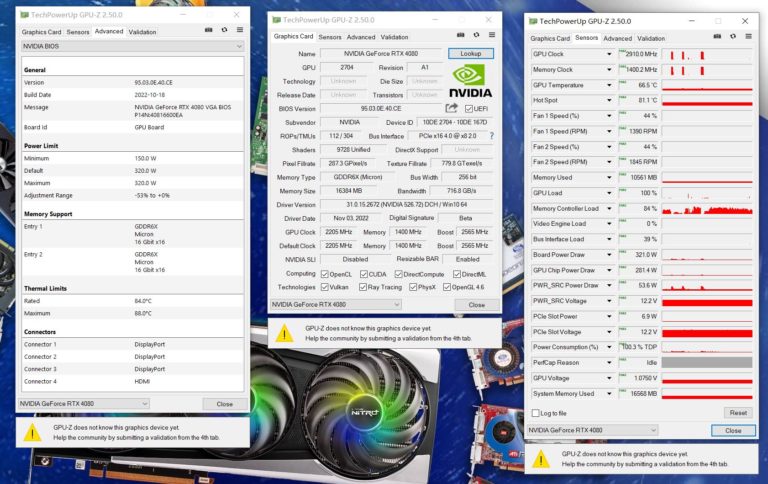