The GeForce RTX 4060 is likely to feature an AD106 GPU with reduced core count, just in case NVIDIA wants to launch a Ti variant later. As it stands now, no rumored specs are known, but this obviously does not apply to board partners such as Lenovo who should know more, especially if a knowledge of Product Planning Manager is considered.

Wolfstame has shared his thoughts on the potential RTX 4060 performance and price estimates. It is not said if this is based on internal information, but he clearly states this is just a guess. Therefore, despite Wolfstame claims before being accurate before, this one should still be taken with a grain of salt. 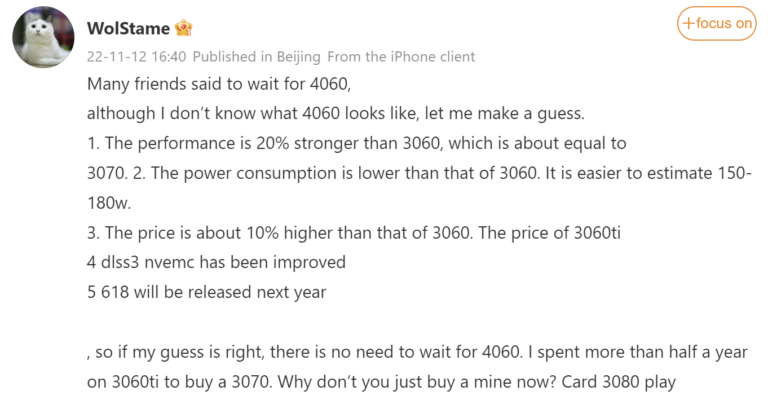 This graphics card is said to be 20% faster than RTX 3060 GPU, at a level of RTX 3070 he claims. This means that RTX 4060 won’t be much of an upgrade, at least not as good as RTX 4080/4090 series. However, this seems very unlikely that NVIDIA’s most popular GPU class would be only such a minor upgrade. Therefore, one might assume that he meant 20% faster than RTX 3060 Ti.

Wolfstame expects 10% higher price than RTX 3060 Ti, which unfortunately still sells at a high price, but its MSRP was $399. One of the key selling points would be DLSS3 support anvd NVENC encoders upgrade, most likely for AV1 codec.

The good news is that RTX 4060 could consume less power than RTX 3060 (170W), which should mean that such solution would also make an impact on mobile segment, should NVIDIA release any soon. According to Wolfstame, RTX 4060 should be expected by so-called 618, which is June 18th 2023 (Shopping Festival).