Over the past few days, leakers have been sharing information on AMD RDNA3 and NVIDIA Hopper/Lovelace architecture. Important details were revealed by Greymon55 today.

According to the leaker, Ada Lovelace is definitely the next gaming series from NVIDIA. In fact, the entire project has been finalized and it should not change, claims the leaker. This means that the specifications that were floating around the web for the past few months may very well be final, however, there are no details on architecture tape-out yet.

Furthermore, the leaker is confident that the architecture will be build using TSMC 5nm process technology, but he is not sure if that’s N5 or N5P. Previous rumors only pointed towards 5nm but it wasn’t sure if NVIDIA will be using Samsung or TSMC for their 5nm product.

Kopite7kimi: Hopper GH202 to the rescue if AD102 is not fast enough

The most prominent NVIDIA leaker “kopite7kimi”, who correctly predicted the specs of the entire Ampere architecture lineup months in advance, is no longer sure that NVIDIA will indeed use Ada Lovelace for GeForce RTX 40 series, as indicated by the tweets he made back in May. NVIDIA’s strategy may depend on the performance of the competing chips, mainly AMD RDNA3 which are to be the first MCM gaming designs.

Kopite says that there is a possibility NVIDIA will launch gaming Hooper GPU such as GH202 instead of AD102.

MLID: Lovelace may also be used in NVIDIA SoCs

Moore’s Law is Dead made a suggestion that Lovelace may not just refer to the desktop GPUs, but also to NVIDIA’s System on the Chips. It is said that Lovelace might actually be a part of NVIDIA’s systems for self-driving cars, possibly under the Orin series. The YouTuber claims that NVIDIA did indeed say that Orin is based on Ampere, but the manufacturer has also said that Orin is a family of products, thus it could also include Lovelace.

He speculates that NVIDIA’s strategy in case AMD RDNA3 architecture is actually a lot simpler than Kopite suggested with GH202. The manufacturer would be trying to outship AMD by making their GPUs as cheap to produce as possible. 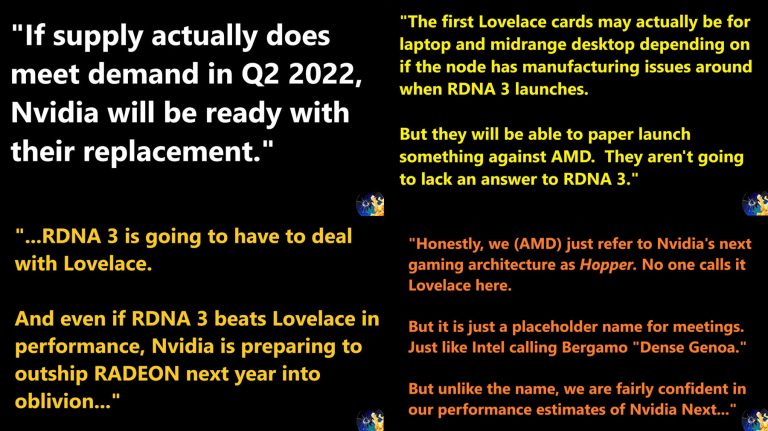 NVIDIA Ada Lovelace by end of 2022

What most leakers appear to agree on is the launch date of the GeForce RTX 40 series. One should not expect an update from NVIDIA till the end of 2022, which shouldn’t be this surprising. NVIDIA has been quite conservative with its 2-year cadence for each gaming architecture.

In terms of specifications, we have only heard about the possible internal GPU structure from Kopite already in December. It was revealed that the flagship gaming GPU (AD102) should feature as many as 144 Streaming Multiprocessors, which suggests a maximum specification of 18,432 CUDA cores. Obviously, to keep the good yields and sustained supply, NVIDIA would be offering a cut-down chip, as they do with Ampere GA102 for most of its stack.