Our friends at TweakTown took NVIDIA flagship GeForce RTX 3090 graphics card for a spin at 8K.

NVIDIA heavily promoted its new flagship graphics card based on Ampere architecture as the first 8K gaming GPU. 8K gaming is still a niche and it will remain so until RTX 3090 successor arrives. The popularity of 4K gaming will probably increase once display manufacturers begin focusing on HDMI 2.1 capable monitors, which can provide a 60Hz+ experience. Three months after the release of the RTX 3090, sadly that is still not the case, and it will probably take a long time before 4K will become a resolution of a choice.

However, the latest GPUs are already capable of delivering four times as many pixels as 4K in a playable fashion, at least the RTX 3090 graphics card does, according to NVIDIA. The trick to make this possible is to enable Deep Learning Super Sampling technology.

TweakTown’s testing platform features Intel’s Core i9-10900K processor and Z490 motherboard. The game settings have all been set to maximum, even the ray tracing which was set to ‘Psycho’. In other words, they took the most demanding game and applied the most demanding settings, after all, if RTX 3090 is not able to produce a good framerate, which graphics card is?

The results were quite as expected. The GPU struggles to produce more than 6.6 FPS without DLSS. Setting the AI-upscaling technology to Quality doubles the framerate to 12. Only after changing the settings to Ultra Performance, the GPU offers 31 FPS. The framerate is a bit better when ray tracing is disabled, then you may be expected around 38 FPS. 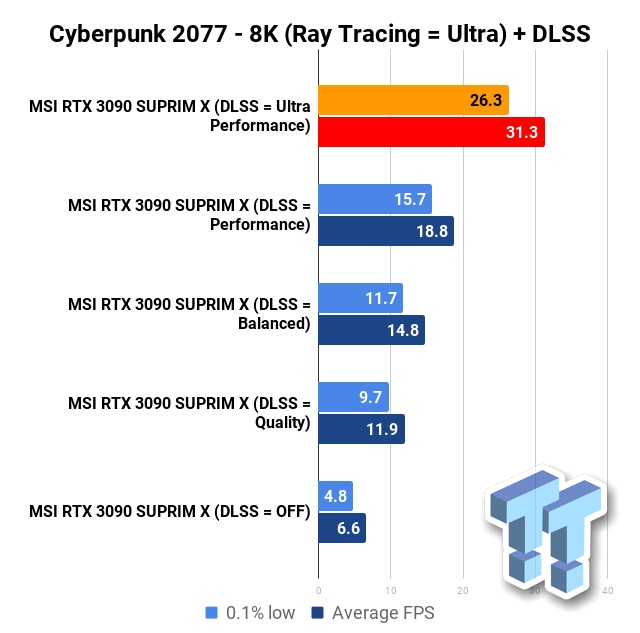 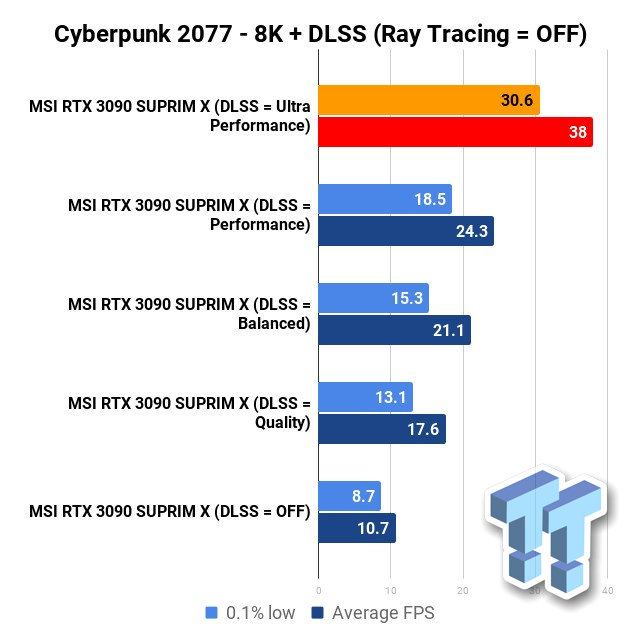 The quick review by TweakTown also shows that 24GB VRAM on the graphics card is hardly enough for the Cyberpunk 2077 running at 8K without DLSS. Only by disabling ray tracing, memory allocation drops to 21 GB.

The game is so demanding, that even the official NVIDIA 8K chart for the RTX 3090 does not list such a bad case of optimization. Cyberpunk 2077 is even more demanding than Control, which struggles to deliver 8 FPS without DLSS. 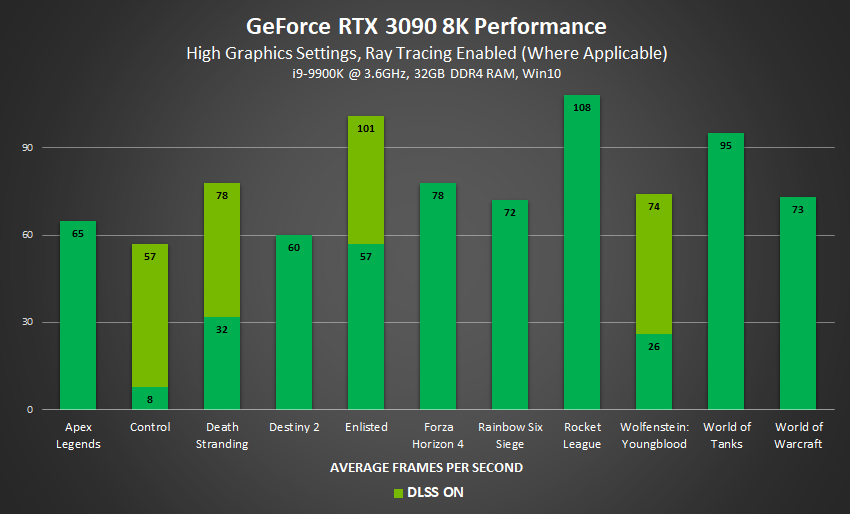