A new HP OEM driver for GeForce graphics cards allegedly lists Device IDs of yet unreleased products. There are however a few things to consider before jumping to conclusions.

The OEM driver often does not list product names, those are added by Laptopvideo2go admins based on the public PCI ID list. This list is maintained by T4CFantasy, who is the maintainer of the competing graphics cards database.

According to T4CFantasy to whom we reached out, those names are 99% correct. He is sure that 2205 ID belongs to the RTX 3080 Ti because he had already seen traces of this new SKU through the software that he wouldn’t name. The GA103 GPU with an ID of 2321 is relatively new and it should also be correct although more information may be required to confirm it.

When it comes to the GA106-based GPUs, it may still be too soon to pinpoint exact SKUs for each graphics card. NVIDIA has recently changed the desktop lineup which added another layer of confusion. It is, however, quite obvious that the 2520 ID should belong to RTX 3060 Mobile. Possibly the same GPU that will be available with the Ryzen 5000H series early next year. The whole tree of 25xx may be exclusive to GA106 GPUs for now.

The list also features GA107 based RTX 3050 entry-level SKU that will also launch around January next year. This also the only GA107 that we are aware to be under development by NVIDIA, however, the manufacturer might and probably will release the RTX 3050 Ti at some point, which should feature the fully enabled chip (RTX 3050 non-Ti is a cut-down version).

As mentioned above, the actual source of those labels from the list is maintained here: 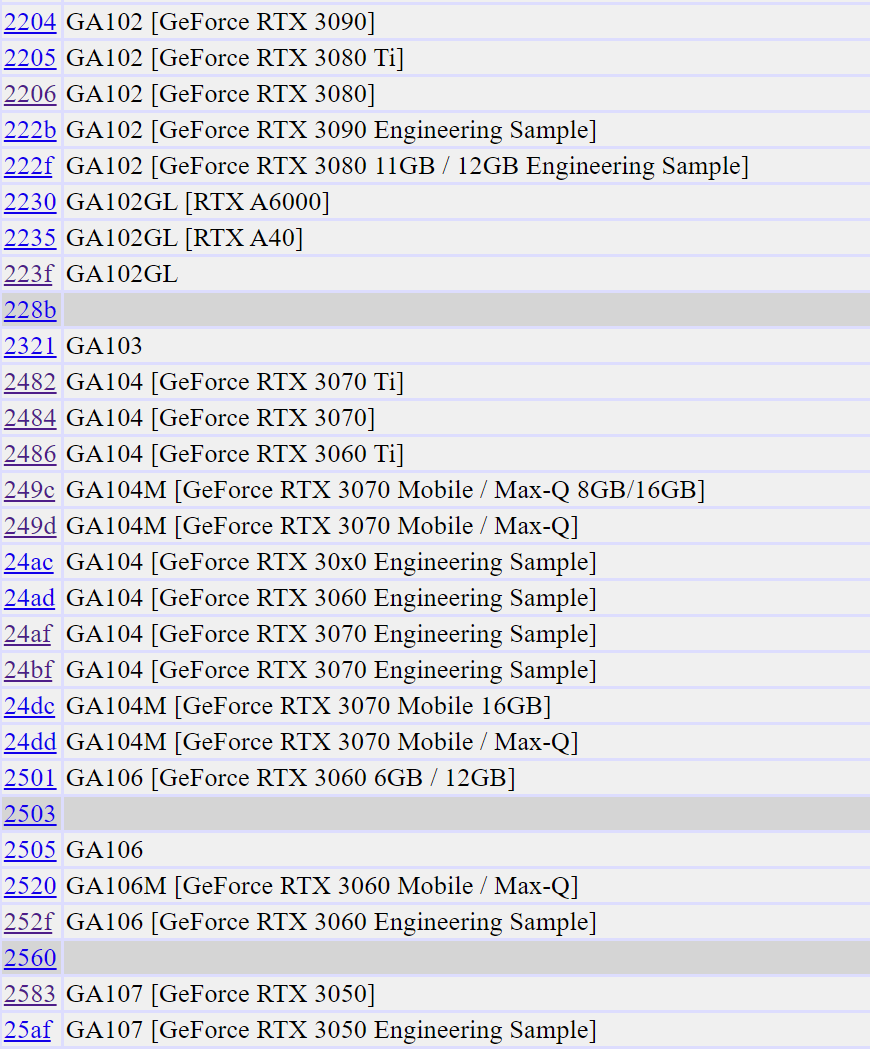 The specifications of the RTX 3080 Ti graphics cards are not confirmed yet. This lack of confirmation applies mainly to the CUDA Core count of the GA102-250 GPU. Rumor has it, it would end up with 10496 CUDA cores, which would be the same number as RTX 3090, but we have not yet seen the final specs of this SKU.

The memory configuration appears to be locked to 20GB GDDR6X, which is basically twice the capacity of RTX 3080 non-Ti. It would also have the same memory bus of 320-bit and the same TDP of 320W. The boost clock will be lowered to 1635 MHz to meet the power requirements.

NVIDIA RTX 3080 Ti will cost less than RTX 3090, although the pricing has not yet been confirmed to board partners. The SKU could match the just-released Radeon RX 6900 XT pricing of 999 USD to offer a better performance to dollar ratio than RTX 3090.