NVIDIA has just announced a new review and launch dates for its products.

NVIDIA has apparently changed the embargo date for GeForce RTX 3080 reviews. We were supposed to see the reviews of Founders Edition models on Monday. Custom board reviews and full unveil (including board designs etc.) were scheduled for September 17th.

Today NVIDIA announced that RTX 3080 reviews will in fact come later two days later and just one day before the official launch and retail availability, on September 16th.

Additionally, NVIDIA has confirmed that GeForce RTX 3070 will be available on October 15th. This date is likely the launch date for the product, so reviews may (again) appear sooner.

No further changes were communicated, so it is safe to assume that the RTX 3090 launch schedule is on track for September 24th. Of course, we will be monitoring the situation and update you on any changes. 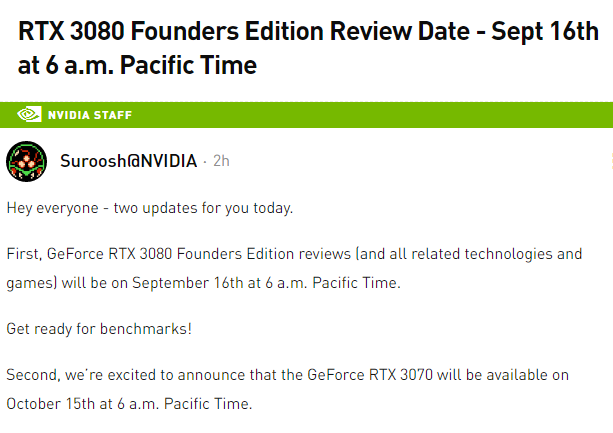