Lenovo has confirmed that their Legion T7 gaming desktop system will ship with GeForce RTX 3080 and GeForce RTX 3070 graphics cards.

Interestingly, Lenovo also confirmed that their Legion T7 system will feature the GeForce RTX 3070 Ti model. This SKU has not been announced or even teased by NVIDIA in any form. Though, it aligns with the rumors that RTX 3070 series will be offered with both 8GB and 16GB memory. What remains unclear is whether the model is really called 3070 Ti or 3070 SUPER, we have heard both names in private conversations with AIBs.

The Legion T7 systems are equipped with an Intel Z490 motherboard and either Core i9-10900K or Core i7-10700K processors, so these are definitely new additions to the desktop Legion lineup.

There is, however, something to consider. NVIDIA clearly did not inform the partners with the full specifications until the very last moment. We have heard that the final BIOS for the Ampere series was provided only recently. The doubled FP32 SM (Cuda) count has also not been communicated clearly to partners until just a few days ago. Hence, some AIBs still list incorrect CUDA core counts (5248/4352/2944) on their websites. What this means is that Lenovo may still rely on old data, which could’ve changed over the past few days.

Another point that this might not be accurate is that all cards (3080/3070Ti/3070) are listed with GDDR6 non-X memory. Thus, theoretically, these might be custom OEM variants of some sort that NVIDIA did not announce yet with slower memory technology. 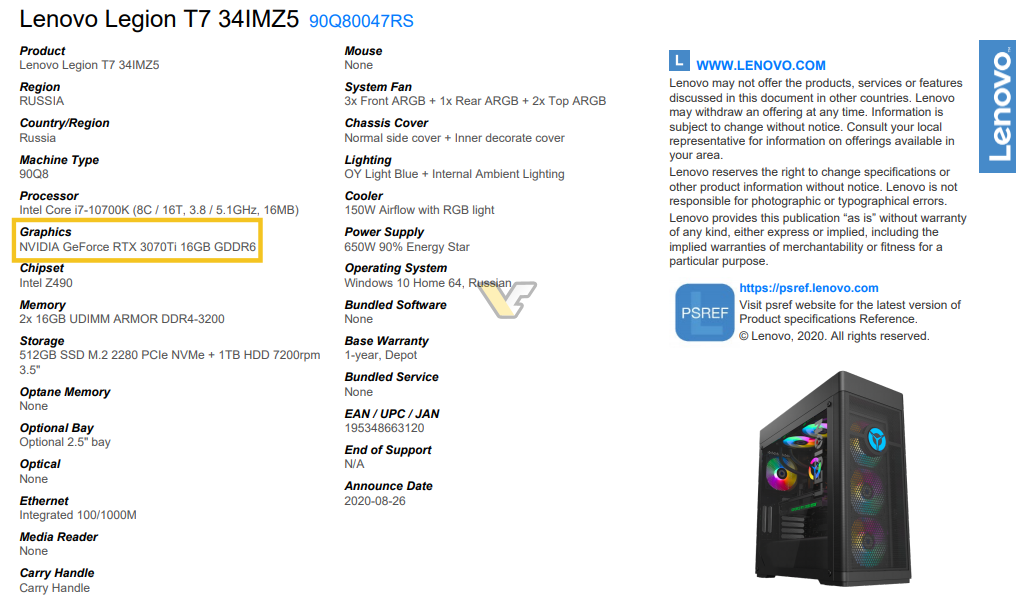