We exclusively revealed that the upcoming GeForce RTX 3070 Ti is to feature a graphics processor codenamed GA104-400. NVIDIA has not provided details on this graphics card to its partners yet but they have confirmed it is now scheduled to launch in May. The GA104-400 indicates that the graphics processor will feature full specs. The desktop series currently do not offer the full GA104 GPU option but NVIDIA did launch such a GPU under its mobile series as GeForce RTX 3080 Laptop GPU.

The GeForce RTX 3070 Ti is not expected to replace RTX 3070 non-Ti. Instead, NVIDIA intends to offer both SKUs simultaneously. Although board partners believe though that NVIDIA will focus on the Ti variant moving forward. This SKU would simply be more competitive against AMD Radeon’s offering. More importantly, though, it would also introduce a crypto mining hashrate limiter, reducing interest from miners (that is until NVIDIA themselves ‘accidentally’ remove the limiter).

According to the latest rumor, RTX 3070 Ti would feature Micron GDDR6X (MT61K256M32E-19G) memory clocked at 19 Gbps. Uniko’s Hardware believes that the card would also be offered in 8GB and 16GB variants. So far we have not heard about such plans, but technically it would be possible if NVIDIA were to offer dual-sided memory support on this SKU. 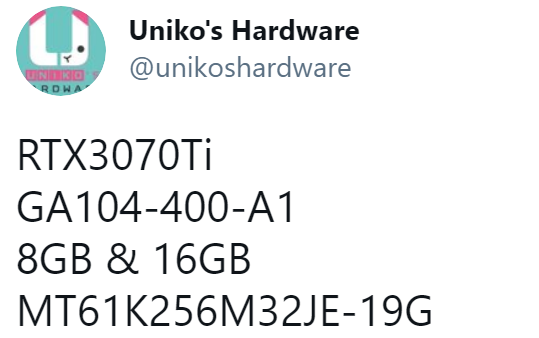 NVIDIA GeForce RTX 3070 Ti is now expected to launch in May alongside RTX 3080 Ti. The global shortage of components is pushing all launches back, so we cannot be absolutely sure that this date will not change either. 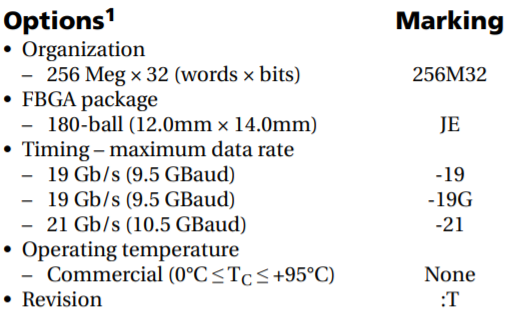