The launch of RTX 3070 graphics cards for laptops is just around the corner.

Meanwhile, at V-Ray 5 website a new score featuring RTX 3070 Laptop edition can be found. The software has recently been updated for GeForce RTX graphics cards which have dedicated cores for hardware-accelerated ray tracing: 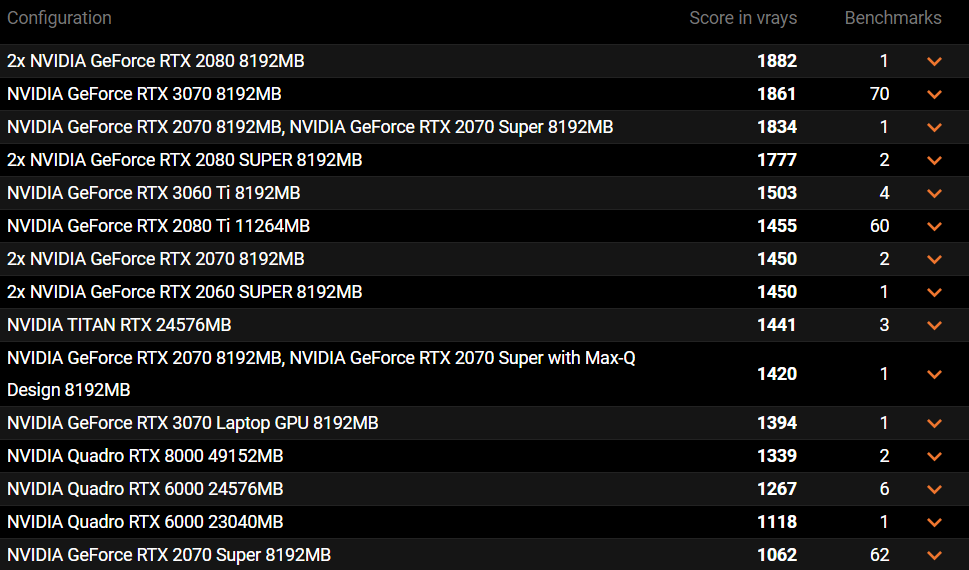 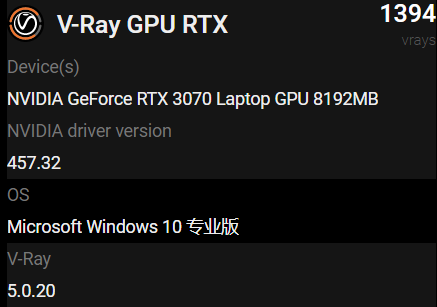 With a score of 1394, the graphics cards appear to be slower than desktop RTX 3060 Ti, which is based on GA104 GPU as well. The desktop variant of the RTX 3060 Ti card scores around 8% higher with 1503 points. The series based on Turing architecture does not appear to be doing just well in V-Ray 5 RTX benchmark, but those are based on 1st Gen RT cores. Compared to the desktop GeForce RTX 2080 Ti, the mobile GeForce RTX 3070 appears to be a few percent slower.

The specifications of the RTX 30 mobile series remain unconfirmed, but it does appear NVIDIA will no longer match its desktop and mobile series with the same GPU. After all, the RTX 3080 desktop launched with a GA102 GPU, and such a big processor is not going to be offered in gaming laptops any time soon. It is expected that the RTX 3080 mobile could feature just as many cores as the desktop RTX 3070 SKU (5888) which is a cut-down variant. This would still leave room for an RTX 30 Mobile SUPER refresh later.

The RTX 3070 and RTX 3060 mobile are harder to predict, but one would guess that RTX 3070 mobile could have a similar number of CUDAs to desktop RTX 3060 Ti. According to the leaked benchmark, that card would still be slower than desktop SKU but that is mainly due to the mobile form factor power constraints.

It is important to note that mobile graphics cards are now offered in many (actually too many) variants. We have full-fledged Max-P models, which are usually reserved for thicker laptop designs, and numerous Max-Q series which often feature TGP (total graphics power) targets varying by 30-40W. Unfortunately, we do not know which variant was tested by the anonymous user in the V-Ray benchmark.

Many thanks to 0xss for the tip!