NVIDIA announced GeForce RTX 3060 with 12GB GDDR6 memory at CES 2021. Nearly two months later the graphics card is almost ready for launch. But even before the card was announced, we have heard rumors that the company may launch this SKU in different variants. Those rumors, however, have not materialized in any substantial leak over the course of a few weeks.

Today, a new filing from Palit to the South Korean National Radio Research Agency reveals that the manufacturer is expecting RTX 3060 6GB after all. A graphics card listed as RTX 3060 DUAL OC would launch under 12GB and 6GB variants, according to the filing: 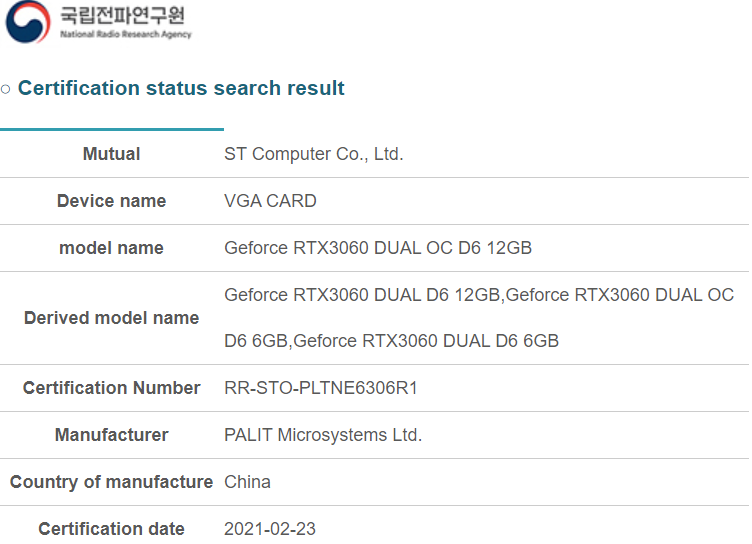 At this point it is not clear if NVIDIA is indeed still planning the 6GB model. Judging from how many XX60 models the company usually launches, it would actually be surprising if the 12GB variant was the only variant. In other words, it is very likely that we will see RTX 3060 6GB, but one would expect it to launch around the same time as Radeon RX 6700 or RX 6600 XT.

We have also recently seen RTX 3060 8GB model in a filing from Gainward (which part of the Palit group). From what we have learned the 8GB has not appeared in any roadmap yet, thus it is likely not happening. However, should this change, we will let you know as soon as we learn something.