NVIDIA’s first GA106 based desktop graphics card will offer similar performance to GeForce RTX 2060 SUPER or RTX 2070 in 3DMark and Superposition tests. The graphics card will be slower than Radeon RX 5700 XT, which also means it’s no match for the upcoming RX 6700 XT. This is the conclusion from the data that we collected from our sources, who are now testing the graphics card before tomorrow’s launch.

The graphics card is targeted at the mid-range market with an oversized 12GB GDDR6 memory buffer for this category. This is the second GA106 based model to be released by NVIDIA, as the company has already launched its mobile RTX 3060 Laptop GPU with 3840 CUDA cores.

NVIDIA GeForce RTX 3060 will probably become a great choice once its price will drop to the manufacturer’s suggested 329 USD. At this point, however, no one should expect to buy the graphics card at this price any time soon.

The RTX 3060 will be NVIDIA’s first model to introduce a cryptocurrency limiter, a technology that reduces the hash rate if the firmware detects it is being used for cryptocurrency mining. The company claims that this will not affect any other workload and that it will not be possible to hack this feature. In theory, this should lower the interest from mining farms, which are now buying GeForce RTX 30 graphics cards in vast numbers, leaving gamers without the cards.

NVIDIA also announced that RTX 3060 will be the first graphics card to support Resizable BAR, a feature so far exclusive to RDNA2 graphics cards. The data that we gathered does not have this feature enabled. 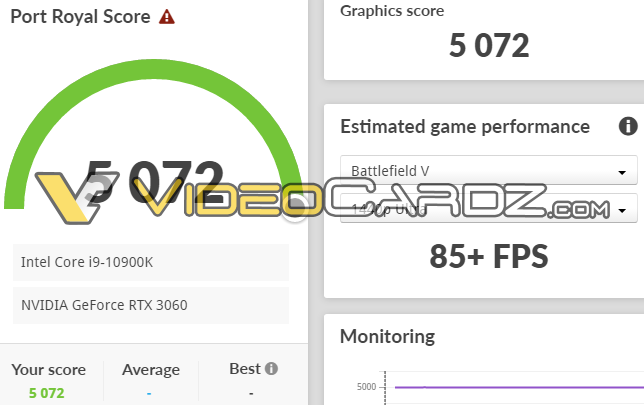