On Geekbench, multiple test runs featuring Samsung 760XDA laptop design featuring Intel Core i7-11800H CPU and NVIDIA GeForce RTX 3050 Ti can be found. The synthetic OpenCL test is probably not the best benchmark for gaming performance estimation, but it is everything that is available at this moment.

According to the benchmark result, GeForce RTX 3050 Ti would feature 20 Compute Units, in this case, NVIDIA Streaming Multiprocessors. Each features 128 CUDA cores, which gives a total of 2560 CUDA cores. Yesterday we learned that RTX 3050 non-Ti features 16 SMs. The RTX 3050 Ti variant has therefore 512 cores more than RTX 3050 non-Ti. Both cards are expected to feature yet unannounced GA107 Ampere GPU. It is possible that the 3050 Ti Laptop GPU will feature the full configuration. It is unclear if NVIDIA has plans to use the same configuration for its desktop GPUs.

The graphics card has been spotted with 4GB memory, which suggests that both models will have the same memory configuration, likely 128-bit and GDDR6 based.

The GPU was tested on a Samsung laptop equipped with an Intel Core i7-11800H CPU. This is a mid-range 8-core CPU from the upcoming Tiger Lake-H series. 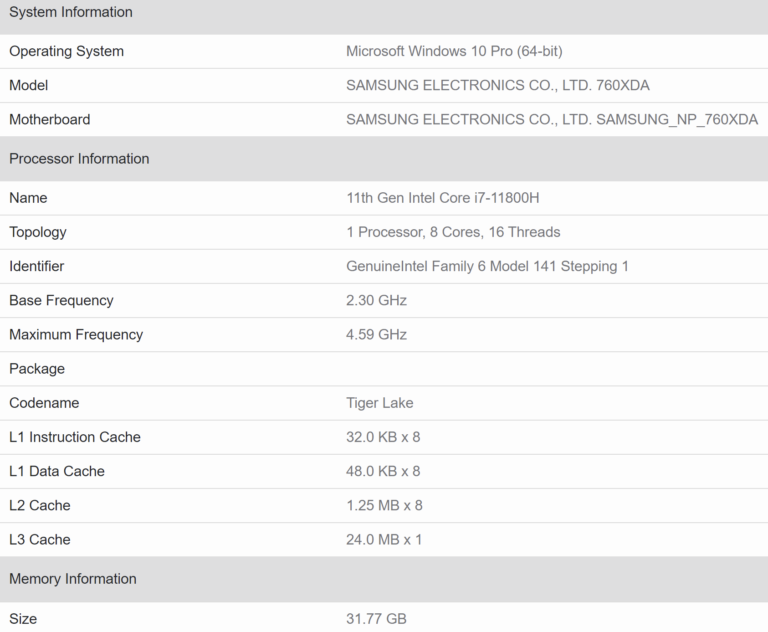 The graphics card scored 60479 points on average in the Geekbench V5 OpenCL test. This puts the card just slightly higher than RTX 2060 Max-Q. With such a score, RTX 3050 Ti is 15% faster than the non-Ti variant.

The RTX 3050 will be the fifth graphics card in the RTX 30 Laptop GPU series: