As part of their review, GamersNexus revealed the MSRP of popular GeForce AIBs.

Is there a chance to buy RTX 3050 at NVIDIA’s official MSRP (Manufacturer’s Suggested Retail Price)? Well, there is, according to NVIDIA’s supplied MSRP list. GamersNexus published a chart featuring ASUS, EVGA, Gigabyte, MSI, and ZOTAC graphics cards. It appears that each brand was ‘forced’ to offer at least one RTX 3050 SKU to be sold at 250 USD. We can see prices ranging from 249 USD to 489 USD (ROG STRIX OC).

What should be noted here probably, is that board partners are very reluctant to supply non-OC models these days. So just because there is a list of cards with NVIDIA MSRP, there is a chance that they will not be shipped in big quantities to distributors. NVIDIA made sure that such cards exist though so it’s totally up to board partners and retailers to offer as many of these cards as possible. 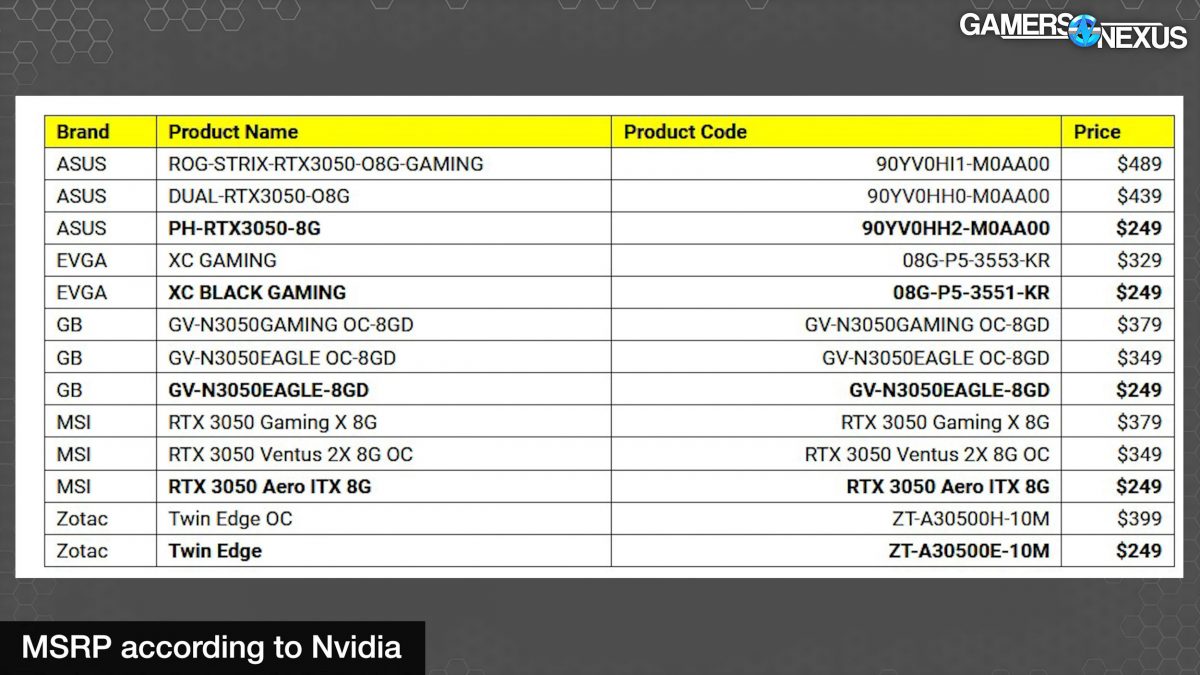 Should the supply of 249 USD models be good, things might start to get interesting in the entry-level segment. NVIDIA RTX 3050 model has shown its strong muscles in yesterday’s reviews, probably not exceeding the expectations but providing a strong counterpart to ‘similarly’ priced Radeon RX 6500XT graphics cards.

According to Overclock3D, there should be at least a thousand RTX 3050 cards available at MSRP in the United Kingdom. Those cards are expected to cost £239.99 and should become available immediately after the embargo lifts.

NVIDIA RTX 3050 officially launches today in exactly 5 hours from now (at 6 AM PST).