Exactly 10 days ago we saw the first confirmation on RTX 3050 non-Ti specs. A GPU-Z screenshot that leaked today appears to confirm it.

On Bilibili a GPU-Z screengrab shows yet unrecognized and unreleased graphics card from NVIDIA. A quick look at the specifications and the data suggests we are looking at GeForce RTX 3050 Laptop GPU.

According to the public PCI device ID list, this GPU would be GA107 or N20Z-QS1-A1 (RTX 3050 non-Ti Laptop is expected to have GN20-P0 GPU). Neither the driver does nor the GPU-Z software recognizes this graphics card model, thus there are many specification details missing.

Assuming that this is indeed RTX 3050 non-Ti mobile then it would confirm that it features 2048 CUDA cores, a 25% reduction from the full GA107 silicon. The graphics card would be equipped with 4GB GDDR6 memory clocked at 12 Gbps, a standard memory speed for mobile GPUs. Furthermore, the boost clock appears to be locked into base clock specs, a 795 MHz is definitely on the lower side, which would suggest that this is indeed a power-limited Max-Q variant. The GPU-Z also confirms that GA107 GPU has ‘Ray Tracing’ support.

The GPU-Z reports that this GPU is attached to a Dell machine (or more precisely has Dell BIOS). What might be interesting is that PCI Express is limited to 3.0, which means that it is either attached to AMD Ryzen 5000 series or Intel 10th Gen Core H-Series CPU. Only the upcoming Tiger Lake-H series will support PCIe 4.0.

NVIDIA has not confirmed the launch date of its RTX 3050 mobile and desktop series. The GA107 Ampere GPU has not been used in any product yet. One would guess that RTX 3050 series will make a debut alongside the Tiger Lake-H series, which is now scheduled to launch in the second quarter according to Intel. 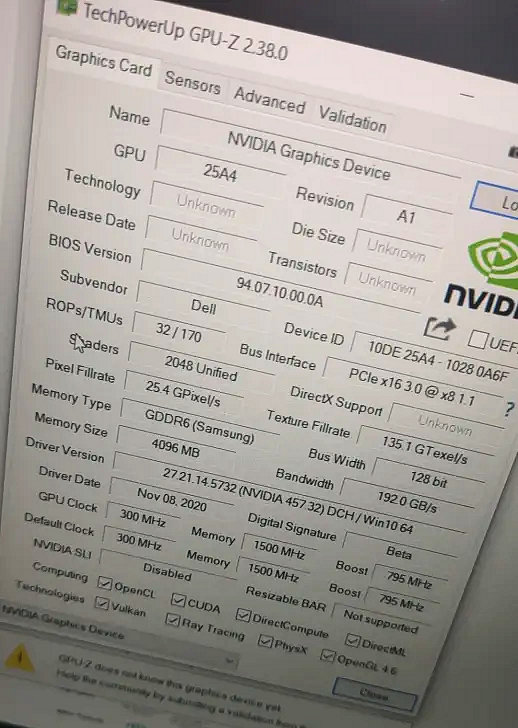