It finally happened, Lite Hash Rate GPUs have been unlocked

The developers of NiceHash confirm they have fully unlocked LHR GPUs through its newest QuickMiner software.

More than a year since LHR cards were first introduced, cryptomining software is now able to benefit from the full potential of NVIDIA RTX 30 LHR GPU. This has been today announced by NiceHash devs.

The LHR cards were meant to lower the performance of NVIDIA RTX 30 cards for Ethereum and other alternative cryptocoins mining with GPUs by up to 50%. Interestingly, the NVIDIA LHR algorithm was first unlocked by NVIDIA themselves, after the company accidentally published the non-LHR driver. NVIDIA quickly has patched LHR algorithm and released a second version of its RTX 3060 GPU. Since then, all RTX 30 cards have shifted to LHR variants, with an exception to RTX 3090 series.

NiceHash developers were among the first to unlock 70% of the LHR algorithm. This was achieved in August last year. Therefore, it took 9 more months to discover the LHR lock mechanism and disable it for most SKU. Today, the software unlocks 100% for all RTX 30 cards with LHR except RTX 3050 and RTX 3080 12GB, which might feature a new type of LHR algorithm that was not yet hacked.

The new LHR unlock only works on Windows operating system and only supports DaggerHashimoto (Etash) algorithm.

We are very excited to tell you that NiceHash QuickMiner (Excavator) is the first mining software to FULLY (100%) UNLOCK LHR cards!

Now you can earn more profits than any other mining software on the market if you are using LHR graphics cards with NiceHash QuickMiner.Support for NiceHash Miner is coming soon.

The LHR unlock has already been confirmed by Benchmark.pl team. They have unlocked RTX 3080 Ti card to 117 MH/s, from previously observed 85-88 MH/s. 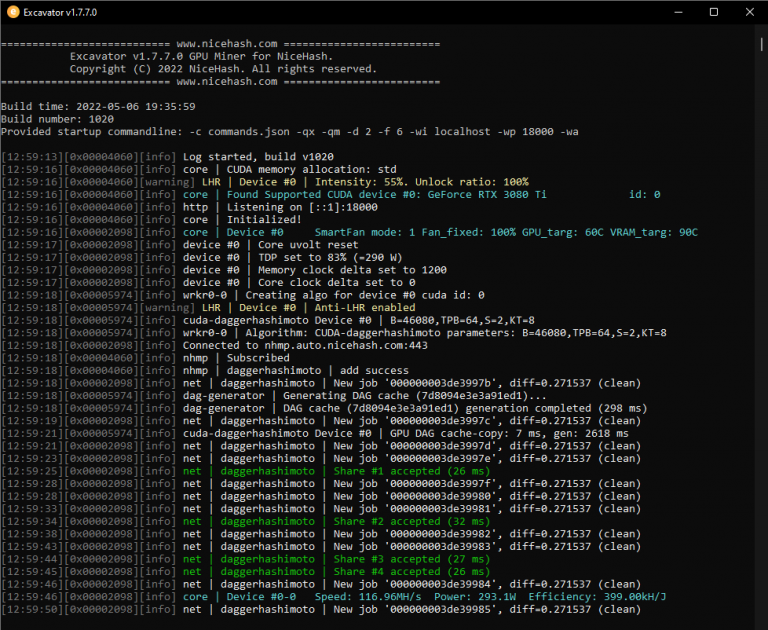