NVIDIA GeForce RTX 2060 12GB will not have a Founders Edition

TechPowerUP has confirmed that NVIDIA will not be launching a Founders Edition of the RTX 2060 12GB model.

NVIDIA’s announcement of the new Turing card was definitely not surprising, considering we have been talking about this card since September. The way it was announced, however, was. NVIDIA only decided to make a silent update to its website and release a short statement for the press.

„The price will vary depending on the specific model and region. It is a premium version of the RTX 2060 6GB and we expect the price to reflect that. Please contact our AIC partners for specific product details and pricing.“

The web page update confirmed that the card features 2176 CUDA cores and is essentially an RTX 2060 SUPER with lower memory bandwidth (it even has the same clock speeds). What the official web page also included was a confirmation of a ‘Founders Edition’ (as shown below): 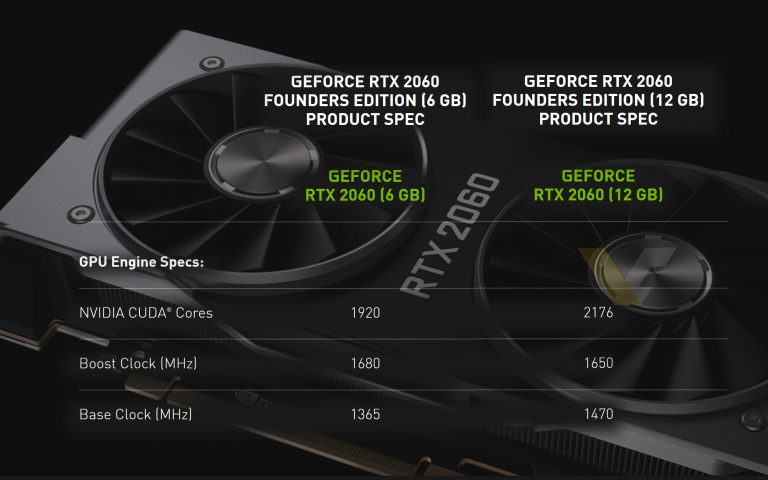 In our original reporting, we concluded that the existence of NVIDIA’s own design is good news because customers will have a chance to buy the card at MSRP either through NVIDIA’s own webstore or through select retail partners. An AIB launch only would mean that MSRP might be a pipe dream as soon as AIB margins and retail overcharged are included in the final price.

Unfortunately, it appears that the listing of Founders Edition was a mistake, as NVIDIA has already removed this information from its website.

TechPowerUP has confirmed with their sources at board partners, that their cards will indeed be the only version of the RTX 2060 12GB cards:

NVIDIA has updated their website to remove the “Founders Edition” part from their specs page […]. We confirmed with NVIDIA that there will be no RTX 2060 12 GB Founders Edition, only custom designs by their various board partners.

NVIDIA RTX 2060 12GB is officially launching on December 7th. So far no board partner has shown its design.