Just hours after confirming the existence of the RTX 2060 12GB model through the drivers, NVIDIA officially listed the new card on its website.

Just as we told you, the RTX 2060 12GB will feature 2176 CUDA cores. The clock speeds for this model are 1470 MHz and 1650 MHz for the base and boost respectively. Both the CUDA Cores clock speeds are identical for RTX 2060 12GB and RTX 2060 SUPER. The new model will be equipped with 12GB GDDR6 memory attached to a 192-bit memory bus. This means that the card will have a maximum memory bandwidth of 336 GB/s, a reduction of 112GB/s compared to the SUPER.

The card is based on 12nm Turing architecture and features TU106 GPU with raytracing and DLSS support. However, some features of the current Ampere generation will not be available for this card, such as Resizable BAR, PCI Express 4.0, or next-gen RT and Tensor Cores. 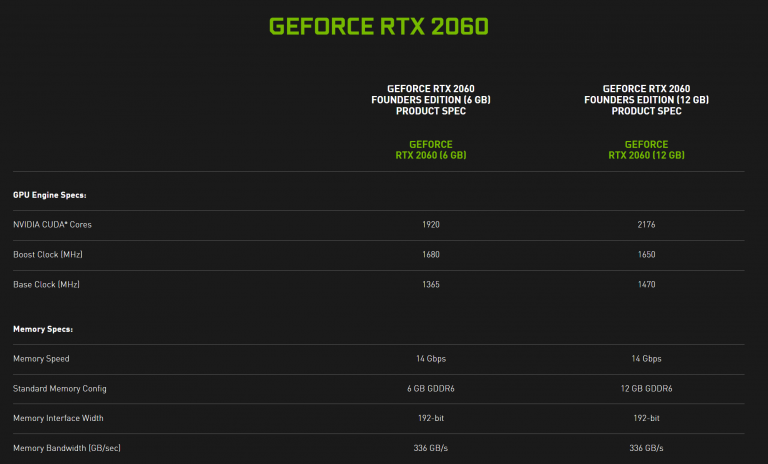 Due to the increased capacity of the memory subsystem, the card officially has 185W TDP is 25W more than the vanilla 6GB model and 10W more than RTX 2060 SUPER.

In terms of pricing, NVIDIA has not yet disclosed the price of the new card, however, a brief statement has been provided to The Verge:

“It is a premium version of the RTX 2060 6GB and we expect the price to reflect that.”

This means it will most definitely cost more than 299 USD, which is the official MSRP for the 6GB variant after it was reduced from 349 USD. Obviously, this pricing has nothing to do with the current retail price, however, there is some good news. The card is officially coming on December 7th.

Update: This card will not launch as Founders Edition, NVIDIA has changed the official listing that mentioned such a model.

Source: NVIDIA via The Verge