Today NVIDIA announces it is increasing pricing for its premium GeForce NOW membership.

NVIDIA Geforce NOW is a low-latency streaming service that offers access to already purchased games through other platforms. The GN does not have its own store. Instead, the service requires users to sign in to all 3rd party game launchers and use the remote NVIDIA PC as a gateway.

Today NVIDIA is doubling the price of its premium tier, formally known as “Founders Edition” to 9.99 USD a month. The 4.99 USD pricing will remain active for those who enrolled in the program before March 17. All new premium accounts will see a price increase. There are no changes to the free tier which is limited to non-RTX games and 1 hour session length.

Monthly memberships are available at $9.99 a month. A new annual membership option, at $99.99, provides the best value.

GeForce NOW wouldn’t be what it is today without our Founders members. That’s why we’re adding the Founders for Life benefit, which continues the special $4.99 introductory rate as long the account is in good standing.

At 4.99 USD GeForce NOW was a great value, at 9.99 USD we expect GeForce NOW popularity to get a lot worse. The program has seen a massive spike in new users thanks to a global shortage of GPUs. NVIDIA GeForce NOW was an opportunity to play games when discrete GPUs were simply not available. 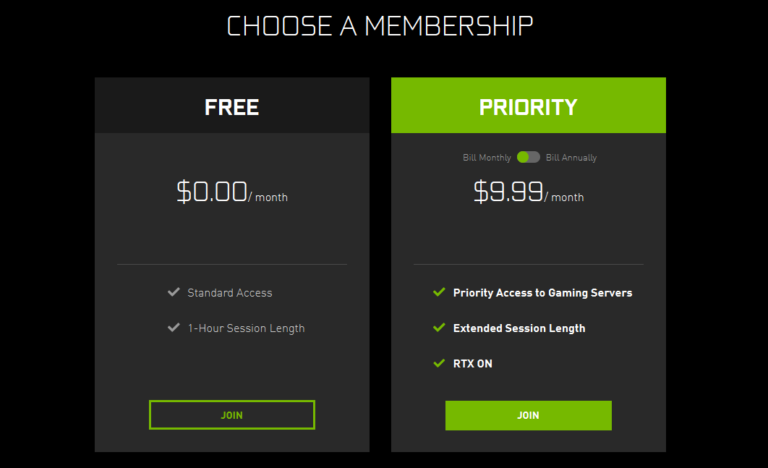 NVIDIA also revealed its plans for the near future. The company will introduce frame rate synchronization to match client-side display capability. It should help increase bit rates and reduce jitter over choppy networks.

GeForce Now will also announce an expansion to more areas. The program is not maintained by NVIDIA in all regions, the eastern hemisphere relies on 3rd party network provider services, which usually meant increased prices over NVIDIA-maintained service. With the price increase to 9.99 USD a month, the difference should not be noticeable by users.