NVIDIA might be focusing on ultra-high-end Geforce RTX 3090 Ti right now, but this does not mean the company abandoned the entry-level segment.

On the contrary, the company introduced mobile GeForce RTX 2050 and soon after desktop GeForce RTX 3050, both cards equipped with RTX/DLSS capable hardware. An even lower tier of graphics, the GeForce MX series has also received a small update in December last year.

NVIDIA GeForce MX550 is a Turing-based discrete graphics for thin multimedia laptops. This is indeed a very interesting segment because it offers nearly identical performance to some of the CPU-integrated graphics solutions, rising the question of why we even need such GPUs.

Over at the PassMark website, the first benchmark of MX550 has been sighted. This card scored 5014 points in the G3D Mark test, which is almost the same score as AMD Ryzen 9 5900HS integrated Vega 8 GPU: 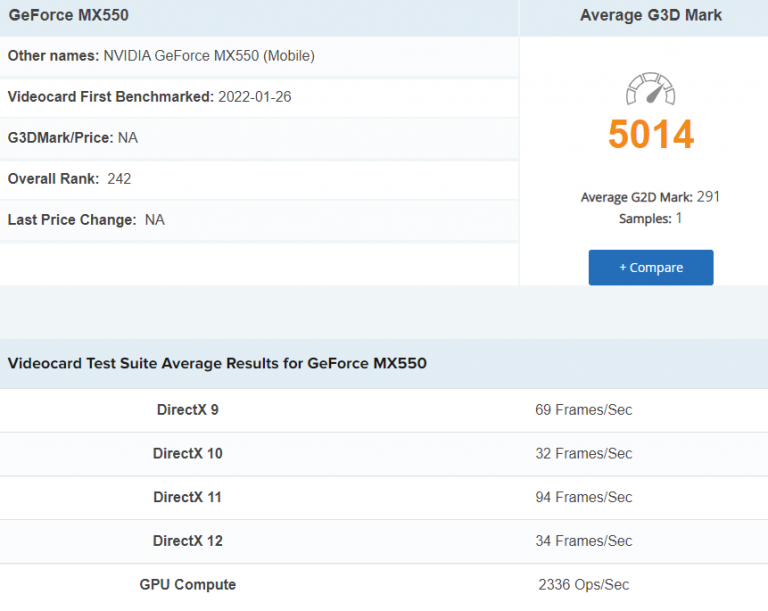 The Ryzen 9 5900HS GPU scores 4968 points, which means that MX550 is just 0.9% faster, this is within the margin of error. PassMark GPU benchmarks are not exactly the most popular tests around, which is why only a very limited number of samples are available. In this case, we are comparing a single MX550 score to 9 samples with 5900HS iGPU. 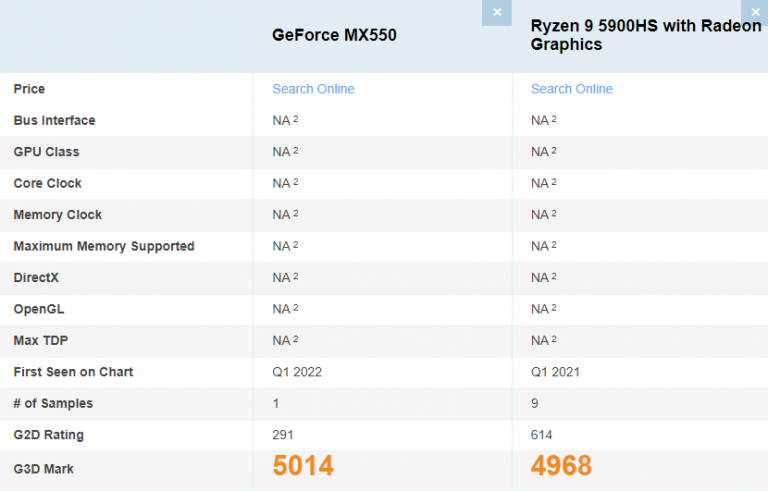 The MX550 is based on TU117 GPU, literally the slowest GPU from Turing architecture. It lacks raytracing and DLSS support, but that shouldn’t really be a problem considering those are not gaming GPUs. NVIDIA has not confirmed the TDP of MX550 dGPU yet. More details are likely to be shared at launch – this graphics card is officially set to become available ‘this spring’.