Move aside RTX, GTX is still the king.

The latest update to Steam hardware survey shows that the GeForce GTX 1650 has surpassed the longstanding GPU popularity king, the GTX 1060.

In November 2022, GTX 1650 gained 0.66% popularity while GTX 1060 had lost 1.85%. The end of the GPU shortages and the PC market healing from cryptocurrency burst were enough of a reason to upgrade from Pascal GTX 1060 series to something more modern, not necessarily something much faster, though.

The GTX 1650 is based on the slowest Turing GPU without RTX support (hardware ray tracing acceleration and Tensor cores for DLSS). In fact, this GPU is actually slower than GTX 1060 6GB. Both SKUs were available with different memory variants (6GB/3GB or GDDR5/GDDR6), which may explain why they are so popular (the listing basically combines both SKUs). 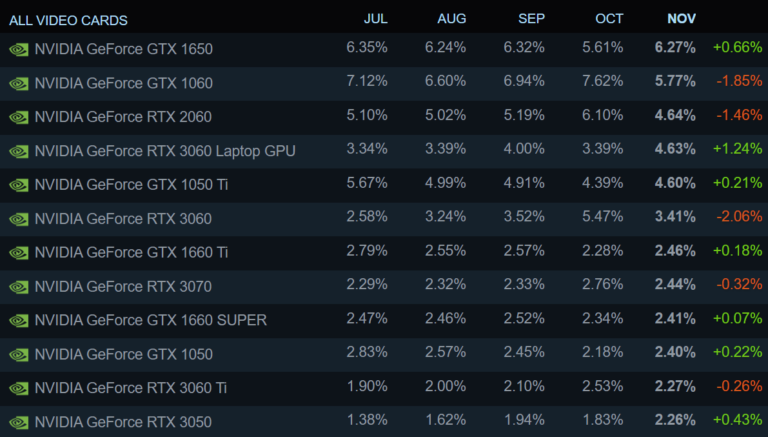 This list shows that XX50 and XX60 series are still the most popular choice among millions of Steam gamers. The GPU makers should continue their focus on saturating this market with as many cards as possible. What the list also shows is that there is not a single Intel or AMD GPU in the top 10 popular video cards.