The upcoming low-end GTX graphics card based on Turing architecture now has a new launch date. According to our source, NVIDIA has just provided a fresh embargo information to its partners, now listing June 15th, 2022 as a new launch date. This means that the card has now been pushed back by two weeks from previously reported May 31st.

The embargo timeline only lists ‘on-shelf’ date, with no review embargo present. This could mean that no review sample seeding is planned, and as a result no launch reviews (unless the media manages to source cards themselves). 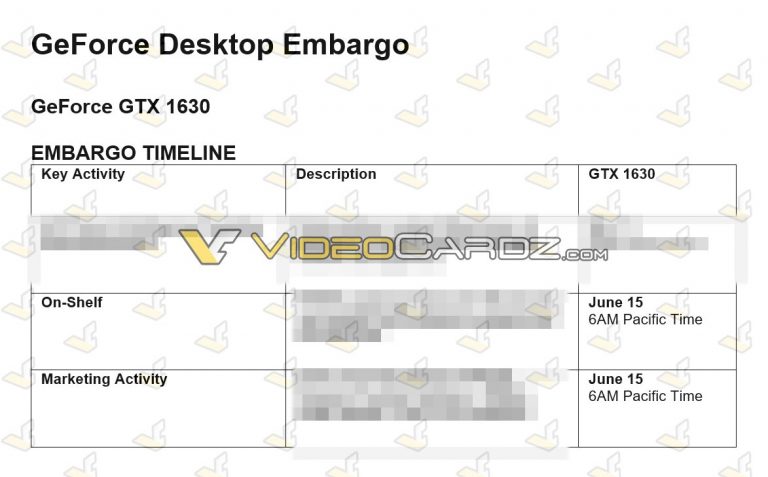 As we have already confirmed, GTX 1630 features TU117-150 GPU with reduced CUDA core count to 512. This is even fewer than GTX 1650 (896 cores). Furthermore, the card will have reduced memory bus to 64-bit. This, as we have just learned, is a significant bottleneck for this card.

Despite featuring the same 4 GB GDDR6 memory clocked at 12 Gbps, the bandwidth has been reduced to 96 GB/s, so lower than 6 year old “Pascal” GeForce GTX 1050 Ti, which this model is supposedly replacing (GTX 1050 Ti is now going EOL). The GTX 1650 GDDR6 alone is at least 72% faster, as long as 3DMark synthetic tests are considered.

NVIDIA have not yet confirmed the launch price for GTX 1630, nor have mentioned the scope of this launch. It may still be limited only to certain regions, which may explain why there are no reviews mentioned.