We have an update on upcoming GeForce GTX 1630 and RTX 40 series launch as confirmed by multiple sources now.

NVIDIA was planning to launch its GTX 1630 graphics card next week, but just a few days ago the company updated its embargo timeline for this model. According to our sources, NVIDIA has sent a letter to board partners with a new embargo date listed as ‘to be determined’. Internally it is explained as problems with securing the necessary components (not GPUs).

It’s worth noting that GTX 1630 ‘GTMK’ (Go To Market Kit) was provided on May 31st and board partners already have first cards manufactured which are being validated as we speak. The packaging design has also been finalized and approved. Board partners are currently awaiting an update on launch date. 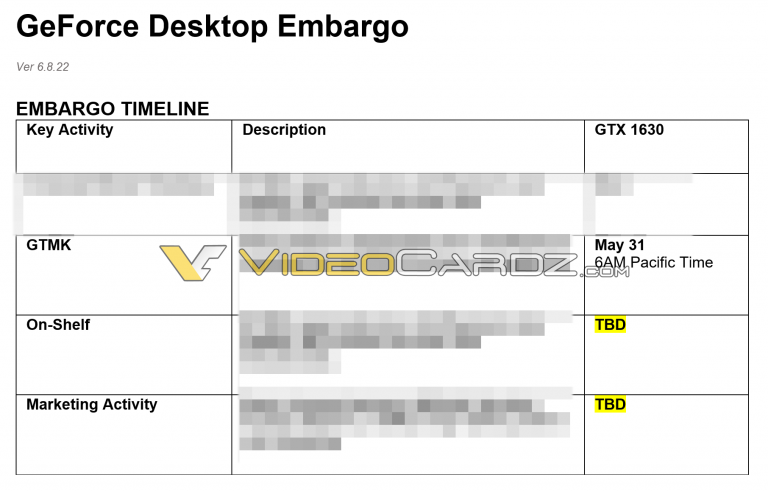 Furthermore, an update to RTX 40 series launch dates has been issued. Although we have already reported after Wccftech that the launch date has been pushed back by a month, we wanted to confirm this information with as many sources as possible first. According to the latest information, the launch has indeed been delayed by a month for RTX 4090 from August to September, RTX 4080 to October and RTX 4070 to November. Importantly, this does not rule out a possible announcement sooner.

As mentioned before, those dates are not a final target. Things are rapidly changing on the GPU market and the incentive now is to sell as many RTX 30 graphics cards as possible before RTX 40 is available. Therefore, AIBs now expect a price cut on RTX 30 series, but NVIDIA has not yet confirmed such plans.