Just a day ahead of the AMD FidelityFX Super Resolution launch, NVIDIA wants to steal the spotlight from its competitors.

Over 57 games will now support NVIDIA Deep Learning Super Sampling (DLSS) technology, a super-resolution technique that makes use of artificial intelligence boosted by NVIDIA Tensor cores. This technology is now supported by NVIDIA Turing (RTX 20) as well as Ampere series (RTX 30) graphics cards. Today NVIDIA confirmed that other games will receive support for DLSS starting with LEGO Builder’s Journey on June 22nd. The DLSS-supported library will also extend with Doom Eternal on June 29th and Red Dead Redemption 2 at some point in the future.

Earlier this month game studios have enabled NVIDIA DLSS support in RainbowSix Siege (the first game to feature DLSS 2.2), as well as No Man’s Sky and The Persistence. NVIDIA also revealed that on July 1st a survival game Rust will also receive DLSS support. 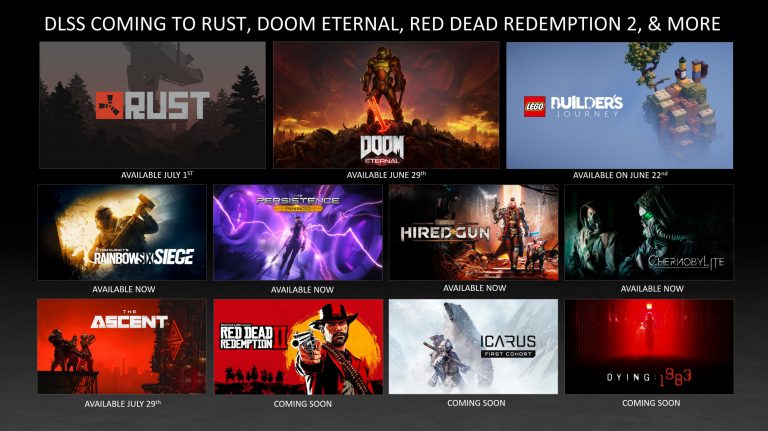 NVIDIA DLSS is also now available as a plugin to Unreal Engine 5, which was released last month. The engine already has its own Temporal Super Resolution (TSR) technology, but it not as advanced as DLSS. NVIDIA also reaffirms that DLSS will be enabled in Unity 21.2, however, no firm date has been given yet.

Starting from today Valve’s Proton will support DLSS on Vulkan titles such as DOOM Eternal, No Man’s Sky, and Wolfenstein: Youngblood. In the fall, NVIDIA will also enable DirectX DLSSsupport for games running via Proton.

The list of DLSS titles has therefore grown to 57, not including applications and game engines: