Just two weeks before the official announcement of the GeForce RTX 3060, NVIDIA changed the specifications of the new SKU from 3840 CUDA cores to 3584. The manufacturer’s shift to the lower-end GA106 variant has clearly caused confusion among AIBs.

NVIDIA GeForce RTX 3060 debuted at CES 2021 as the first GA106 based graphics card. NVIDIA officially did not disclose the GPU model of the new graphics cards nor when exactly would it card be available. However, a few add-in-board partners have provided more information on the new SKU.

NVIDIA did reveal the clock speeds on their website, but for some reason, the values were rounded up and thus not very accurate. However thanks to AIBs we have learned that the card default clock is 1320/1777 MHz (base and boost). Some AIBs were not yet ready to list the clock speeds, due to the fact that their cards are factory overclocked and still under evaluation, however, they seem certain that the memory speed will remain at 15 Gbps.

Only one board partner (Galax) confirmed that the RTX 3060 features GA106-300 GPU, while Gainward confirmed that the GPU is 8nm. This would prove that all three Ampere GPU are based on 8nm architecture and manufactured by Samsung.

PNY and PALIT appear to agree on RTX 3060’s memory capacity, power consumption, and CUDA core count, however, manufacturers disagree on clock speeds and the maximum bandwidth of the new SKU. We have not been able to confirm why PNY lists specifications that are so much different from other AIBs, but we believe that the specifications are based on a different SKU that wasn’t released yet (RTX 3060 6GB), thus the listed specs are in fact a mistake: 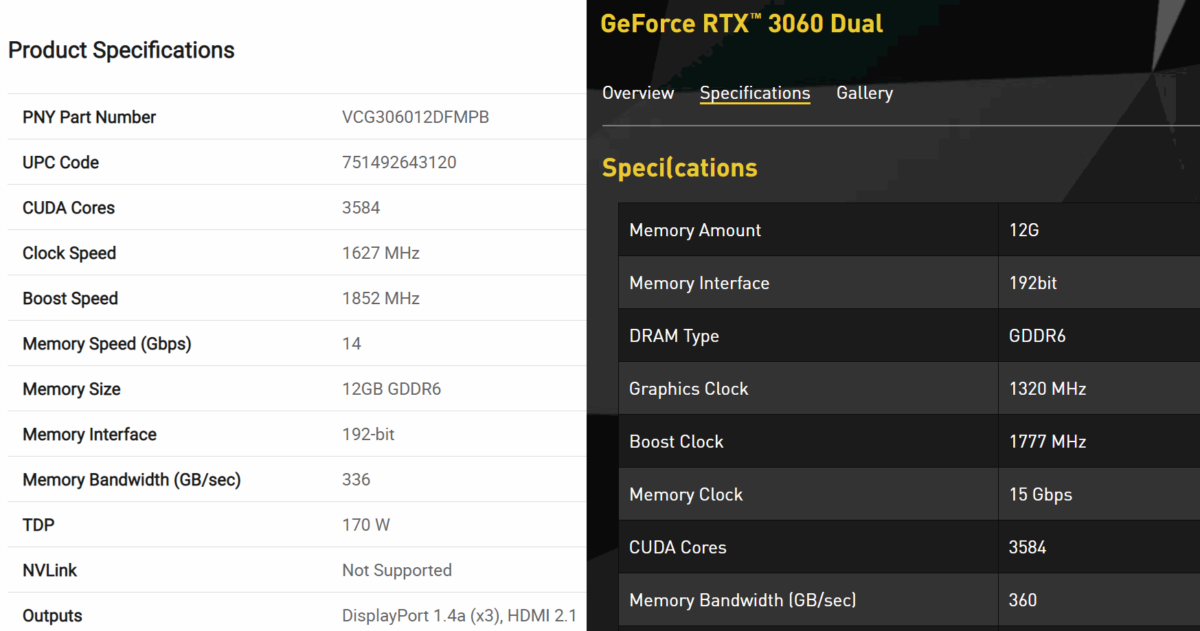 The official specification sheet for the Chinese Galax models confirms that cards are based on a GA106-300 graphics processor:

Gainward datasheet confirms that the RTX 3060 SKU is based on 8nm process technology:

The official RTX 3060 teaser video showcases a new RTX 30 graphics card design, likely to be a render of a reference RTX 3060. It is unclear if NVIDIA has any plans to sell this reference design as Founders Edition, but since official slides did not feature any pictures of the card itself, it would appear that RTX 3060 is an AIB-only launch.

The teaser features GA102 GPU instead of GA106. The number of memory modules does not appear to correspond to RTX 3060 either. We’re not sure which card is being shown here as a part of the RTX 3060 teaser video, but this certainly is not the card in question.

NVIDIA officially declared that GeForce RTX 3060 will be available in late February. The card will cost at least 329 USD. 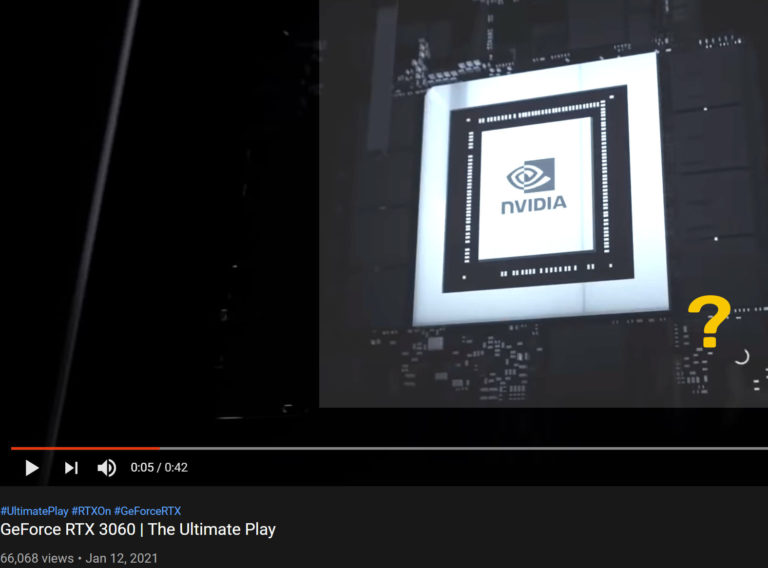