NVIDIA has just announced a new series of products designed specifically for cryptocurrency mining. The new series is in response to the growing popularity of Ethereum mining.

The CMP HX series shouldn’t be considered graphics cards, in fact, they won’t even feature display outputs, according to the announcement. These cards will be similar to Pascal P10X series which were available during the previous mining craze through AIBs exclusively. Those cards were offered with a limited warranty and had low resale value (due to lack of drivers and display outputs). Those cards were simply useless to gamers.

NVIDIA announced four CMP HX cards, which will offer Ethereum hash rate from 25 MH/s at 125W to 86 MH/s at 320W. These cards will be offered with up to 10GB of VRAM, which indicates it would be a similar GPU to GA102. According to the announcement, the CMP HX series will become available in the first quarter, while the 10GB models will go on sale in the second quarter.

NVIDIA also announced that the upcoming GeForce RTX 3060 will have a special driver that will automatically detect mining-specific algorithms, which will limit the hash rate by 50%. This would ensure that the RTX 3060 would be useful to gamers, not miners.

NVIDIA has never attempted to discourage miners from buying GeForce graphics cards in such a way. It is unclear how the software will work and if this only applies to Windows drivers.

Update: Ryan Smith from Anandtech received a confirmation from NVIDIA that the mining nerfing will apply to Linux drivers as well:

I just got a note back from NVIDIA: they're confirming that the RTX 3060 Linux drivers will have the Ethereum performance nerf as well. Which is to be expected, but it's nice to get confirmation, since Linux is the the OS of choice for mining at scale.

KEY FEATURES
Designed for professional mining operations
NVIDIA CMP allows a fully open, airflow-optimized bracket and is configured to allow a greater number of GPUs to be controlled by one CPU.

Optimized for best mining performance
NVIDIA GPU architecture allows you to mine more efficiently and recoup your mining investment faster. 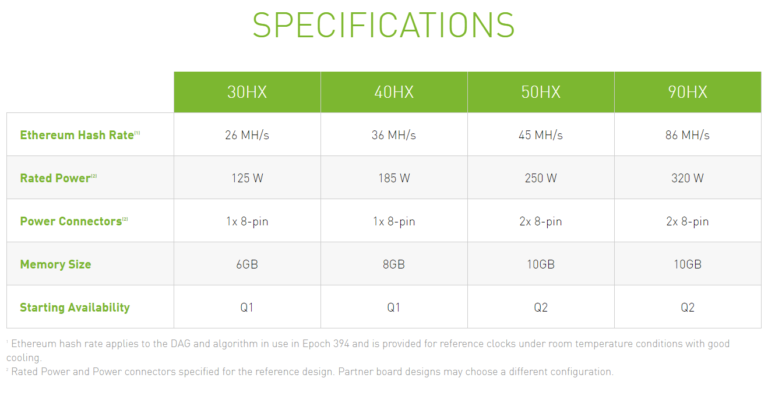 We are gamers, through and through. We obsess about new gaming features, new architectures, new games and tech. We designed GeForce GPUs for gamers, and gamers are clamoring for more.

Yet NVIDIA GPUs are programmable. And users are constantly discovering new applications for them, from weather simulation and gene sequencing to deep learning and robotics. Mining cryptocurrency is one of them.

With the launch of GeForce RTX 3060 on Feb. 25, we’re taking an important step to help ensure GeForce GPUs end up in the hands of gamers.

That only makes sense. Our GeForce RTX GPUs introduce cutting-edge technologies — such as RTX real-time ray-tracing, DLSS AI-accelerated image upscaling technology, Reflex super-fast response rendering for the best system latency, and many more — tailored to meet the needs of gamers and those who create digital experiences.

CMP products — which don’t do graphics — are sold through authorized partners and optimized for the best mining performance and efficiency. They don’t meet the specifications required of a GeForce GPU and, thus, don’t impact the availability of GeForce GPUs to gamers.

For instance, CMP lacks display outputs, enabling improved airflow while mining so they can be more densely packed. CMPs also have a lower peak core voltage and frequency, which improves mining power efficiency.

Creating tailored products for customers with specific needs delivers the best value for customers. With CMP, we can help miners build the most efficient data centers while preserving GeForce RTX GPUs for gamers.