The RTX 4070 Ti is not to be released until next week, but NVIDIA is already preparing their product pages for the official launch. It looks like one of the marketing teams has made a mistake by sharing/uploading the data early.

Basic specs and some official performance figures were shared by NVIDIA France who already took this information down. Thankfully, this was quickly spotted and captured by hardware leaker @momomo_us.

NVIDIA confirms that RTX 4070 Ti is indeed a rebranded RTX 4080 12GB (the one and only ‘unlaunched’ GPU in the history of NVIDIA GPUs). This model is to feature 7680 CUDA cores and boost clock up to 2.61 GHz. NVIDIA confirms this GPU features 12GB of GDDR6X memory. All the specs are identical to the RTX 4080 12GB. 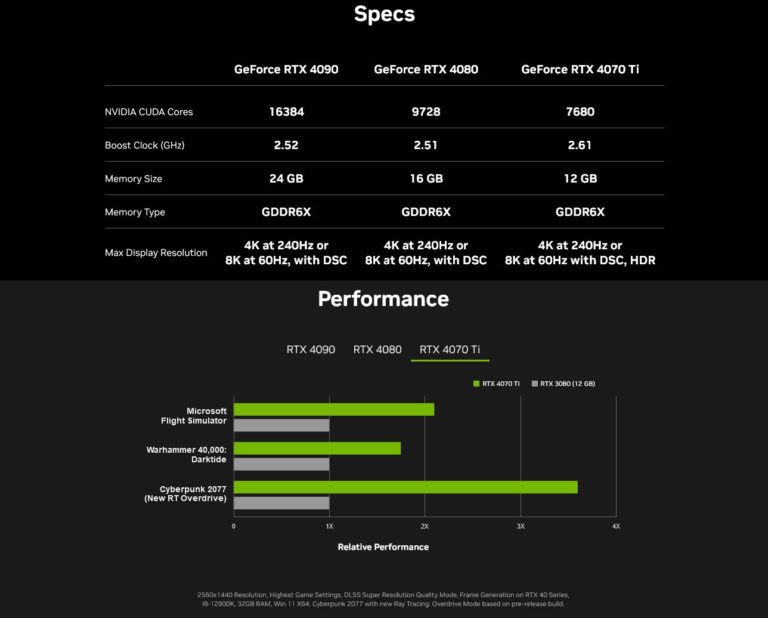 NVIDIA is also sharing some performance claims supposedly delivering up to 3.5x performance of RTX 3080 12GB in games such as Cyberpunk 2077. Obviously, those figures are meaningless as they are based on DLSS upscaling comparison not raw raster performance.

The GeForce RTX 4070 Ti is now set to launch on January 5th, supposedly at $799 in the US. However, since only custom models will be available, this MSRP may be short lived.