Looks like NVIDIA released the first driver from its new 500 series branch.

Back in June NVIDIA officially confirmed it is retiring support for Kepler GPUs with the new drivers. The first consumer driver lacking Kepler support should be expected next month, in October. However, the first 500 series driver has already been released. As announced it lacks Kepler support, but still supports Maxwell and Pascal SKUs.

The 510.06 is a WSL (Windows Subsystem for Linux), which is now being distributed through Microsoft Insiders Program for Windows 11 users. It is also possible to download the driver manually (link below), and it works in Windows 10 too. The driver weighs 894 MB and features no changes to the installer or control center.

The INF files still feature Maxwell GTX 900 series as well as Pascal GTX 10 series SKUs. There are no GTX 700 series here however which are based on Kepler architecture. As suspected, the GTX 700 series based on Maxwell GPUs are still present, this includes GTX 750 TI, GTX 750, and GTX 745 SKUs. 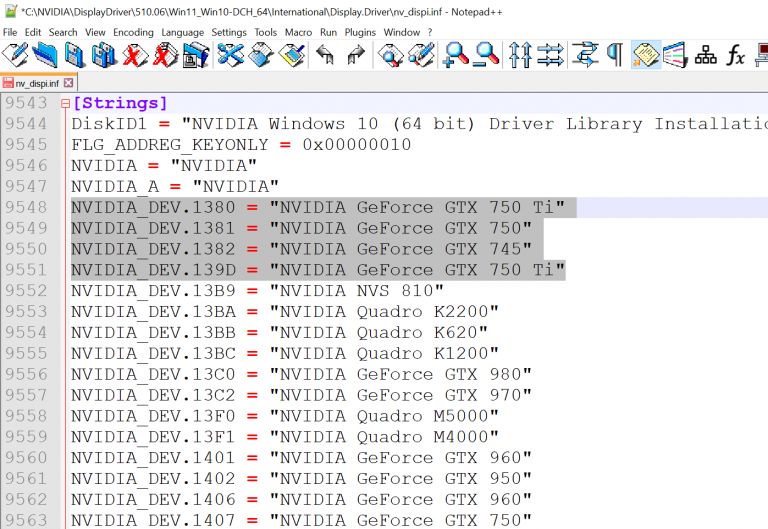 NVIDIA has made no changes to the Control Panel. The HDCP status page still shows the Quadro FX model released 17 years ago.

As noted by Stefan3D from LaptopVideo2Go, the new driver features new runtime compilers called: nvcompilernext64.dll / nvcompilernext32.dll. It is unclear what could be their use at this point, but he speculates that they might be used by Ada Lovelace in the future. Those compilers do not expose SM 9.X yet though, he notes.