AMD Radeon Pro but with all V

A rare AMD graphics card has been tested by “NeedsMoreGPUs”.

AMD launched a number of Vega 20 models, including workstation, data-center and even gaming cards. Easily the most recognized SKU is Radeon VII, a high-end model with 3840 cores, 16GB HBM2 memory and over 1 TB/s of bandwidth.

The company made several other Radeon based on Vega 20, such as Radeon Pro VII, a workstation variant of non-Pro version, a Radeon Instinct MI50 and MI60 (featuring 3840/4096 cores respectively) and Radeon Pro Vega II. The former is possibly the most interesting one with Vega 20, released exclusively for Apple Mac systems. AMD made two cards actually, with either one or two Vega 20 GPUs on a single board. This was by far the most powerful Radeon GPU AMD released at that time.

The prototype discovered by Redditor is shown as Radeon Pro VII in the software. At the same time Device PCI ID matches Radeon Instinct MI60, so this prototype is definitely something in between the two. Redditor published a PCB picture of the card featuring a Vega 20 GPU with four stacks of HBM2 memory. It is powered by two power connectors (8+6-pin) and is most likely using around 300W of power. One can also notice the connectors used exclusively for development purposes, confirming this is not a final product.

In real-world tests the GPU is not performing at its full speed. The single-precision compute is around 13.5 TFLOPs and memory read is 6614 MB/s. However, this screenshot proves that the max GPU clock is 1.7 GHz so the same clock as Radeon Pro VII. 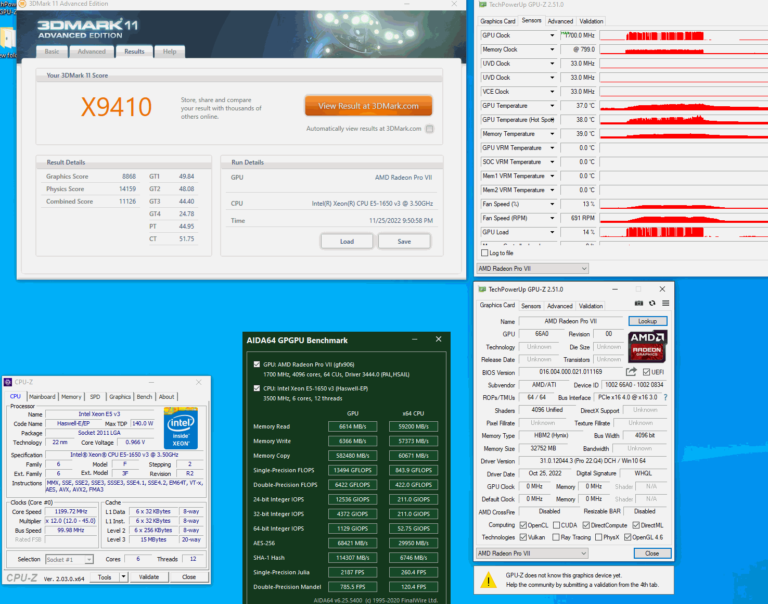 TechPowerUP has a picture of this model and according to the information available on the web, this prototype might have ended up as a Radeon Pro V420. Nevertheless, the Vega 20 product family had a very interesting history and an extensive list of models, not something we can say about Navi 3X GPUs yet.