Last month we reported that NVIDIA canceled the GeForce RTX 3080 model with 20GB memory. The decision was made shortly after the AMD Radeon RX 6800 launch, which put a fight on the high-end GeForce RTX 30 models that launched 2 months earlier. As a result, NVIDIA decided to drop plans for the 20GB model (and for the RTX 3070 16GB as well). Instead, two weeks later the company included a new SKU in its development list. The GeForce RTX 3080 Ti is currently scheduled to launch in January.

We are not sure why MSI has submitted the 20GB models to Eurasian Economic Commission today. It might be an automated submission. There could also be a recent change in the roadmap that we are not aware of. Either way, the RTX 3080 20GB SKU appears at the same time as RTX 3060 Ti, which launches next month. The original launch date for RTX 3080 20GB was also scheduled for the first week of December.

The return of Sea Hawk and Aero Series

It appears that MSI will launch its water-cooled series soon. The RTX 3080 and RTX 3090 would get a Sea Hawk X (with pre-installed water block) treatment but also Sea Hawk non-X (with hybrid AIO cooling). The list also features the Aero series coming to the high-end SKUs. These cards usually feature a blower-type cooling solution.

The leak reveals plans for the 3060 Ti, which launches next week. MSI will launch Gaming (dual-fan) and Gaming Trio series (triple-fan). The Ventus 3X (triple-fan) and Ventus 2X (dual-fan) is also planned in many variants. The Twin Fan series which was released this week for the RTX 3070, is also planned for the new SKU. MSI had already submitted the SKU to EEC two weeks ago. This list appears to be extended by new SKUs.

The listing also features a 6GB version of the 3060 Ti, but we do not know about such SKU yet. On the other hand, the RTX 3060 non-Ti is planned as both a 12GB and 6GB variant, so this might just be a typo. 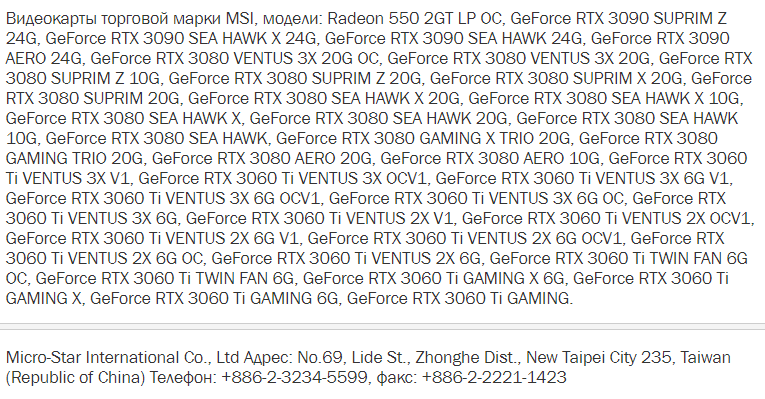