The rumors about Core i9-13980HX processor are now finding their confirmation, thanks to MSI. A next-gen Raider GE78HX gaming laptop has just been tested with Geekbench software. The product name suggests that this model will get a design upgrade, so the chassis may look different from the current-gen GE77HX model.

According to the leak, the internals will be heavily upgraded. From 16-core Alder Lake CPU option to 24-core Raptor Lake CPU. It looks like this system will offer up to Core i9-13980HX CPU, which is said to be the flagship of the new series. This processor will reportedly boost up to 5.6 GHz, and as it turns out, this leak confirms exactly that. The detailed Geekbench data shows that the CPU boosts up to 5.56 GHz, with an average clock of 5.48 GHz. 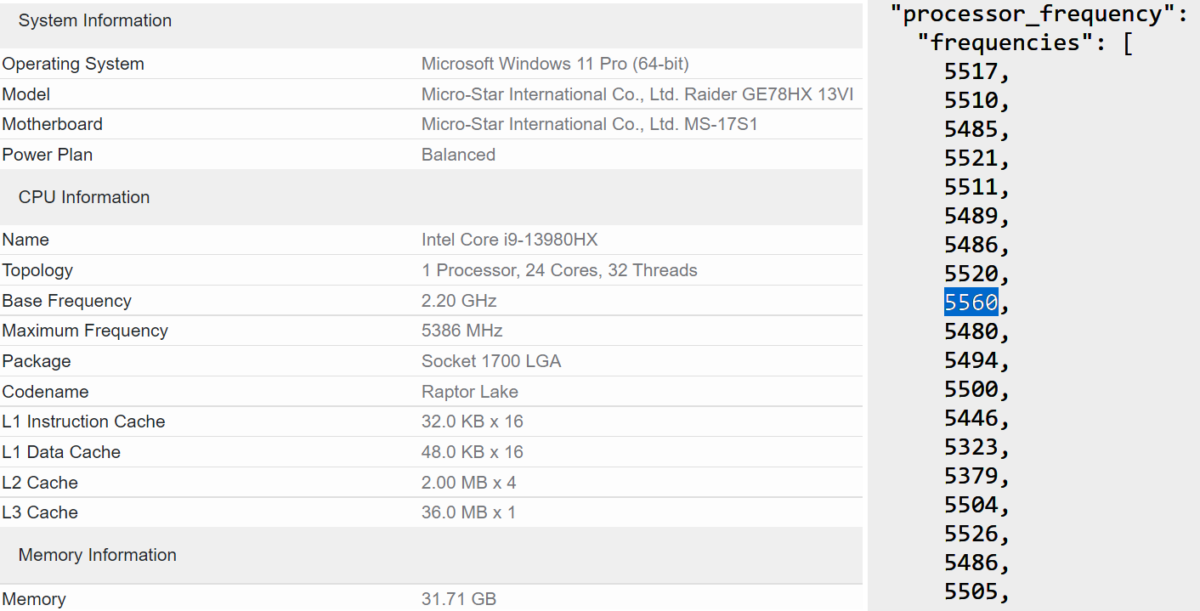 The CPU has already been seen running this benchmark, but on different systems. ASUS STRIX G16 and G18 are reportedly equipped with the same processor, but the scores that were actually a bit lower than MSI GE78HX. In this case, the i9-13980HX scores 2097 and 22062 points in single-core and multi-core Geekbench CPU Compute benchmarks.

This score puts it above any of the known 13th Gen Core mobile CPUs in terms of single and multi core performance, and within 4% range to Ryzen 9 7950X desktop CPU. This shouldn’t really be that surprising, though, considering that the i9-13980HX is a desktop silicon repurposed for high-end mobile systems and Geekbench software is relatively a short benchmark. Short enough for 157W turbo boost to be sustained through the whole benchmarking process.

The i9-13980HX is part of a broader upgrade to Intel mobile stack. The company is preparing at least twelve SKUs for various gaming systems. The HX series, which this CPU is part of, should be paired with discrete graphics, which in this case means GeForce RTX 40.